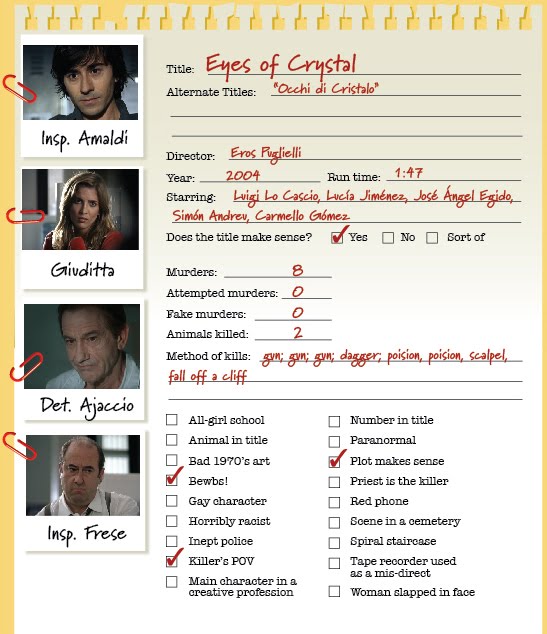 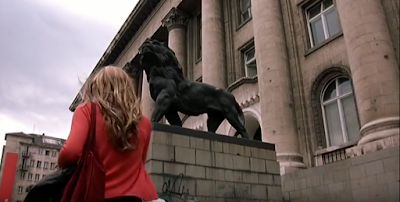 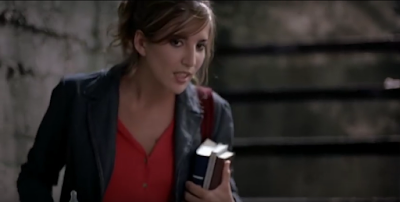 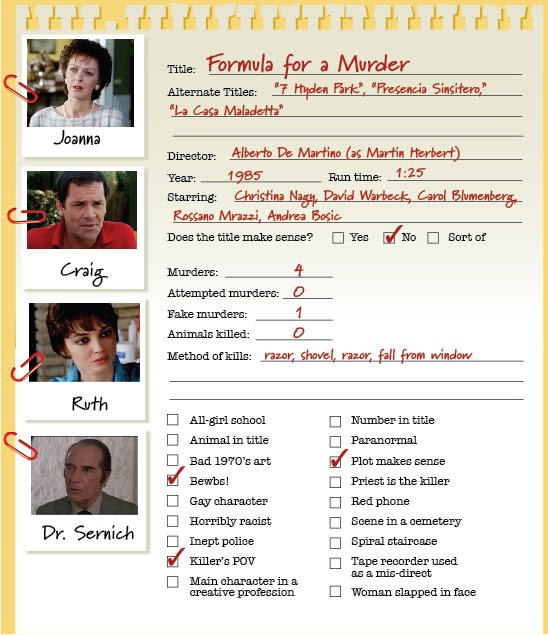 
"You won't have time to feel sorry for yourself when we're married."

As a child, Joanna (Christina Nagy) was raped by a priest and, during the attack, fell down a flight of stairs, leaving her paralyzed. The priest was caught and convicted but Joanna has repressed all memories of the incident. Now, years later, Joanna is a Paralympic hopeful, in love with her trainer, Craig (David Warbeck), despite the objections of her assistant, Ruth (Carol Blumenberg). When Craig proposes marriage, Joanna's physician, Dr. Sernich (Rosano Brazzi) reveals details about Joanna's tragic past and warns that if her memories re-emerged, her weak heart couldn't take the stress and she would likely die. Meanwhile, a mysterious gloved figure is murdering local priests and Joanna is having terrifying visions of her childhood attacker holding a bloody doll. Are they really just hallucinations? Or has her attacker returned to finish the job?

Formula for a Murder (not to be confused with Date for a Murder) is the final film by director Albert De Martino, whom you may remember from The Killer is On the Phone. This is a middling addition to the canon - while the plot does ultimately make sense and there are some well-shot kill scenes, the identity of the killer is revealed a mere 34 minutes in and the movie ends with a big clunky question mark.
What the Hell Am I Watching?

What kind of bow grip is this for a champion-level archer? All four fingers? Seriously?

Also, there's a scene near the end where Joanna gets picked up and can clearly be seen kicking her feet.  I call shenanigans.

Ruth is the fashion star of the film. We first see her in this look - a masculine jacket with epaulets and a men's tie.

Later, she wears a more formal, expensive-looking, but equally masculine jacket, buttoned at the top.

These Peter Pan collars are a motif running throughout the film.

Finally, notice the use of yellow in this movie - just as Joanna is haunted by a distant sense of fear, her surroundings are punctuated with highlights of yellow. It's always in the background, from her outdoor patio...

...to the Staten Island Ferry.

But in her nightmares, she's completely surrounded in yellow. 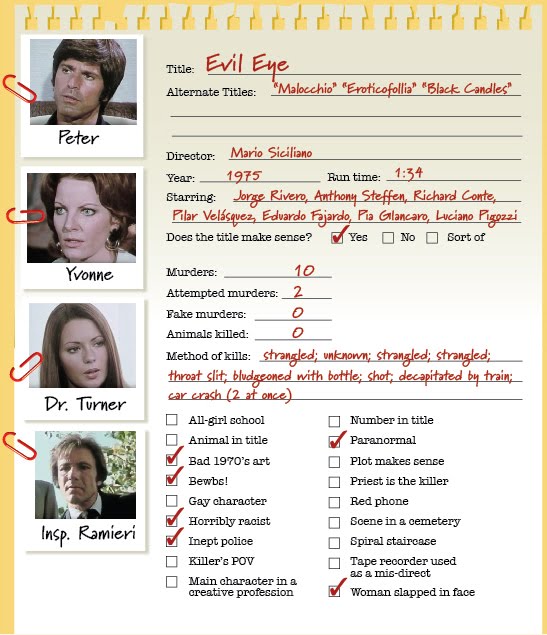 Evil Eye
"Do you think it's possible for a nightmare to continue when one's awake?"
Playboy expatriate Peter Crane (Jorge Rivero), who is haunted by dreams of satanic rituals and anguished souls, is shocked to meet a woman, Yvonne Chevrel (Lone Flemming) who shares the same visions. Peter is inexplicably compelled to murder Yvonne but then immediately wakes up from a dream - but was it a dream? And are the objects that seem to move on their own part of his hallucinations? To add to the confusion, Peter starts receiving threatening calls and letters from a blackmailer, who threatens to expose him as a murderer.  Even though Peter seeks help from psychiatrist Dr. Stone (Richard Conte) and beautiful Dr. Turner (Pilar Velásquez), he keeps envisioning murders before they happen. Is Peter insane? Or is he merely the puppet of a satanic cult? Skeptical Inspector Rameri (Anthony Steffen) tries to find answers and may become a believer in the process.
Evil Eye (not to be confused with The Girl Who Knew Too Much, which is sometimes also called The Evil Eye) is an interesting blend of Spasmo's psychadelic weirdness and L'Aldila's sense of supernatural dread, seasoned with elements and images from Dario Argento's early work.  It all amounts to a confusing mishmash of plot threads where motivations and logic get hazy, culminating in an anticlimactic ending that was certainly meant to be a heady twist.

Even with all the voodoo stuff, naked ghosts, moving objects and unexplained ideas in this movie, the weirdest scene is the one where Peter and his girlfriend Tanya (Pia Giancaro) shower, brush their teeth and make out all at the same time.

Peter meets an old woman who, it turns out, is a ghost - but her timeline doesn't add up at all. His friend's wife, Elizabeth (Daniella Giordano) says that the old woman died three days before, implying that she was buried or at the morgue. But later, the police find the old woman's body in the yard. If Elizabeth knew the old woman was dead, why did she leave the corpse in her yard for three days? And are we to presume that Peter killed the woman three days ago, forgot about it, and then came back to see Elizabeth?

Early on, Peter wakes up in this stylish yellow (yes, "giallo") kimono. 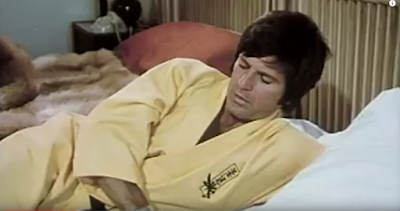 Peter sees the doctors about his confusing dreams - but what he really needs is a cure for Saturday Night Fever. 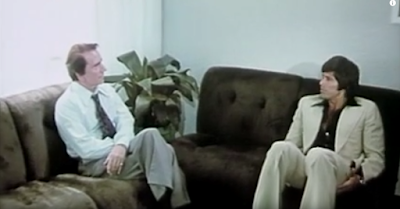 And when he stops by Derek and Elizabeth's house, he's decked out in head-to-toe acid washed denim (shirtless, of course). 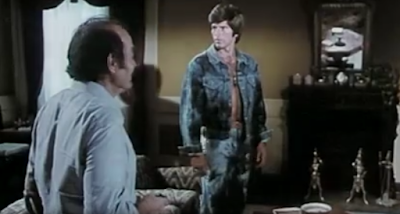