What Have They Done to Your Daughters? 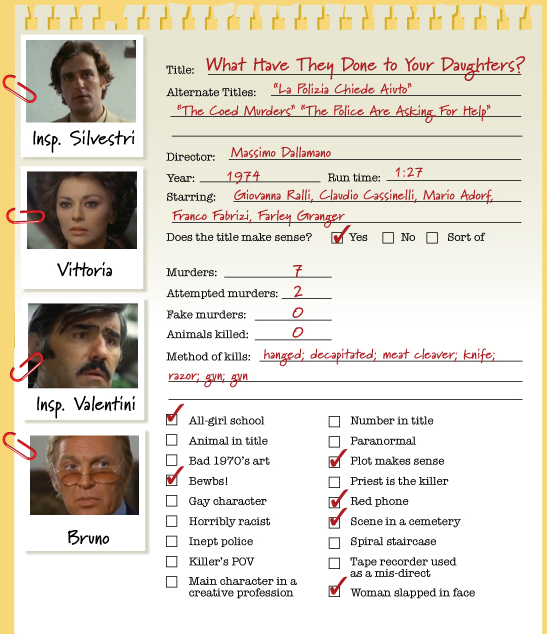 What Have They Done To Your Daughters?

The body of teenager Sylvia Polvesi (Sherry Buchanan) is found hanging in an attic apartment and when it's discovered that her death was a murder and not a suicide, Inspector Silvestri (Claudio Casinelli) is assigned to the case. With the help of Assistant District Attorney Vittoria Stori (Giovanna Ralli) and Inspector Valentini (Mario Adorf), Silvestri uncovers a sordid conspiracy of prostitution and drugs. But as they dig deeper, a leather-clad biker wielding a meat cleaver is eliminating witnesses. Could Bruno Paglia (Franco Fabrizi), the peeping Tom who photographed the crime scene, know more than he's letting on? The police need help – but everyone has something to hide.

If you're a fan of Law and Order, you'll likely enjoy What Have They Done To Your Daughters? (not to be confused with What Have You Done With Solange?). Like that TV show, this movie shows how the police and DA's office work together while sometimes being at odds with each other. And like on Law And Order, justice sometimes means compromise in the end. Massimo Dallamano seems to enjoy working these intriguing moral complexities into his movies and they're certainly welcome in a genre that too often features shallow stock characters.
What the Hell Am I Watching?

The police uncover an audio recording of the teenage prostitutes' encounters with their clients. While we never see what's going on, it's more than clear. The tape unspools for quite some time and gets progressively more violent and disturbing as it goes.

While evading the police, the killer sets up an ambush and one poor cop gets a surprise amputation as he reaches for a light switch.

As a District Attorney, Vittoria needs to present herself as a strong, decisive woman, and her business attire is very dark, formal, and masculine. But in the one scene where we catch her at home with her guard down, we get to see her in something comfortable, colorful and feminine. This red floral maxi dress is a peek into her character's inner life.

Also, notice how the colors in her clothes tie her into her surroundings. It's clear that this is her safe place, where she's most comfortable.