The Man With the Glass Eye 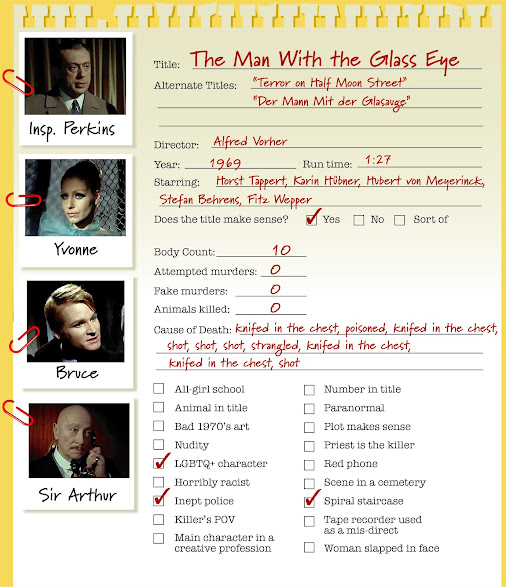 "The longer the hair, the stupider you get."

A prominent London businessman is found in a hotel room with a knife through his heart and a mysterious glass eyeball nearby and, the next day, showgirl Laila (Heidrun Hankammer), who was with the victim at the time, is found dead backstage. Inspector Perkins (Horst Tappert) is on the case, with the help of the libidinous Sir Arthur (Hubert von Meyerinck) and squeaky-voiced Sergeant Pepper (Stefan Behrens). But the investigation soon uncovers a sinister plot involving organized crime, human trafficking and drug smuggling. Who is the mysterious masked vigilante killing off members of the cartel? What dark secrets is showgirl Yvonne hiding? And will Scotland Yard be able to stop the sinister plot in time?

The Man With the Glass Eye (not to be confused with The Man With Icy Eyes or Eyes of Crystal or Blue Eyes of the Broken Doll) is the 14th and final adaptation in Rialto Films' Edgar Wallace series and viewers will recognize familiar tropes from the other films: organized crime, hidden rooms, backstage theater drama, and devious upper-class criminals. This one is really more krimi than giallo, but the presence of a masked killer blurs the genre lines a bit. It's a fast-paced crime caper with a complex plot, some good action scenes, a bit of humor and a satisfying ending.

• I've checked "Inept Police" above, despite the fact that the police solve the crime and save the day. This is in regards to Sir Arthur, who recommends the wrong course of action at every turn. The case is solved by going against his instincts.

• Out of everyone in the cast, viewers outside of Germany might recognize Fitz Wepper (Yvonne's boyfriend Bruce) as Fritz Wendel in the 1972 film adaptation of Cabaret.

• There are actually lots of glass eyes in this movie. There's the crime boss, who has a literal glass eye who hides out in a billiard hall called "The Glass Eye." The killer, is also shown with one white eye and the pass key to get into the smugglers lair is a glass marble, painted to look like an eyeball, which lots of people (including one child) have in their possession. The title might also refer to the cameras that the mobsters have hidden around the billiard hall.

Along with the Las Vegas Girls and Rubiro the knife thrower, one of the acts in the nightclub show is a nosy ventriloquist with a truly disturbing dummy.

Late in the movie, the killer wears the dummy head as a mask while taking out a victim. 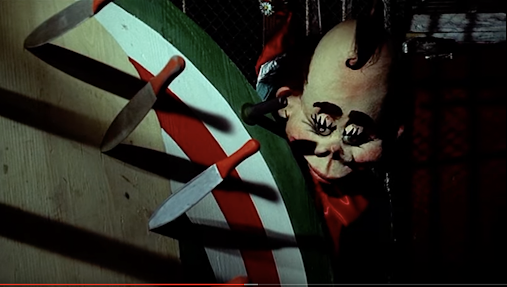 The Las Vegas Girls official color seems to be teal. we see them wearing it on and off stage. 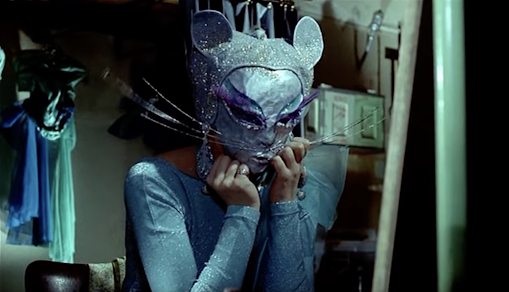 And, finally a look at the killer's outfit - a classic giallo look except for the white mask, which seems to be a staple of this Rialto Films series. 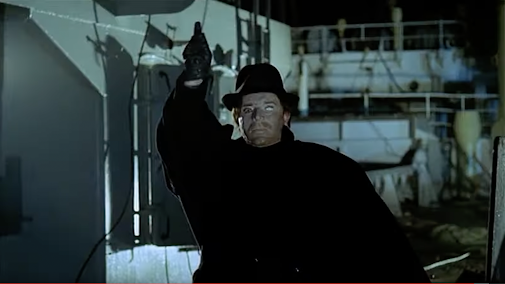 Crime in Via Teulada 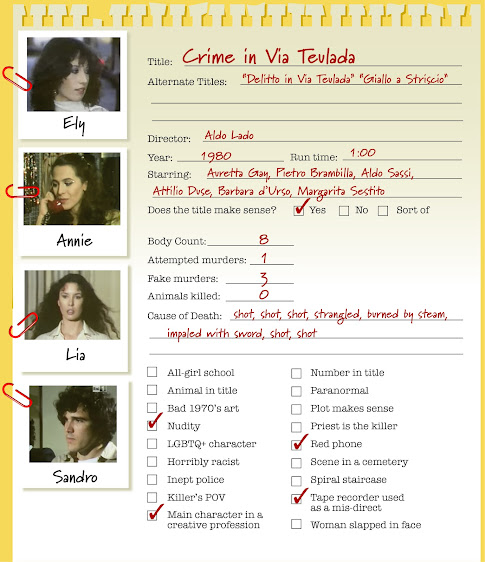 "It's always shadows for me."

Behind the scenes of a busy television studio, amid the chaos of performers and crew, production assistant Lia (Auretta Gay) discovers a dead body in a storage room - but by the time she calls people over to show them, the body has disappeared! Intern Sandro (Pietro Brambilla), dancer Annie (Barbara d'Urso) and blind phone operator Ely (Margarita Sestito) resolve to help Lia find the truth. But as they investigate, the killer strikes again and again, murdering anyone who gets too close to the truth  and collecting evidence of the crimes. Who could the killer be? Can the team find out before the murderer does them in?

Crime in Via Teulada (not to be confused with Crimes) was originally aired on Italian TV as a serialized segment on the show "Variety" - the same show depicted in the movie. It appeared over 15 episodes, each about five minutes long and was later edited together for a video release. Because of this unusual structure, there's not a lot of time for introducing and establishing characters but, on the upside, it means there's a murder scene, chase or suspenseful moment every few minutes. Though it doesn't stand up to the genre's greats, it's an interesting experiment in the giallo form and worth checking out.

• The killer's motive - to find and hide an incriminating diary - is clearly lifted from Blood and Black Lace. Also, the behind the scenes showbiz setting is similar to Dario Argento's Opera, which would come out a few years later.

• Director Aldo Lado made his name as the director of Short Night of the Glass Dolls, Who Saw Her Die? and, much later, Circle of Fear.

• Throughout the film, we see crew testing out special effects tricks - getting stabbed, impaled with a sword, and dropping a mannequin from a rooftop. All those same effects are later used at some point by the filmmakers of Crime in Via Teulada to kill off characters. It's rather meta.

• The original title was Giallo a Striscio, which translates as "A Smear of Yellow."

In order to hide one of the victim's bodies, the killer shrink wraps her onto a board and places her among a group of prop statues. One can't help but make comparisons to Han Solo in carbonite in The Empire Strikes Back, which was released the same year as Crime in Via Teulada. 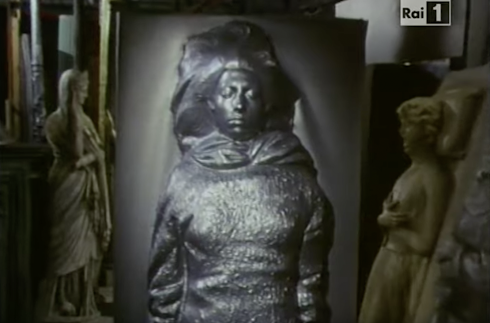 Here's a look at the dancers' Vegas-style costumes on the set of "Variety." 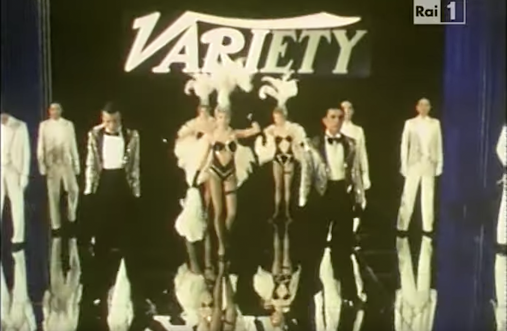 Notice that the logo for "Variety" is identical to the masthead for the American entertainment newspaper of the same name.

Also, a shout out to Annie for this cool hooded leather coat. 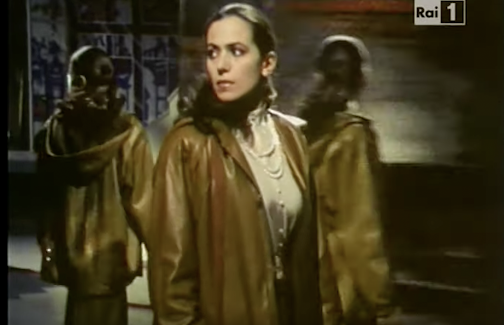 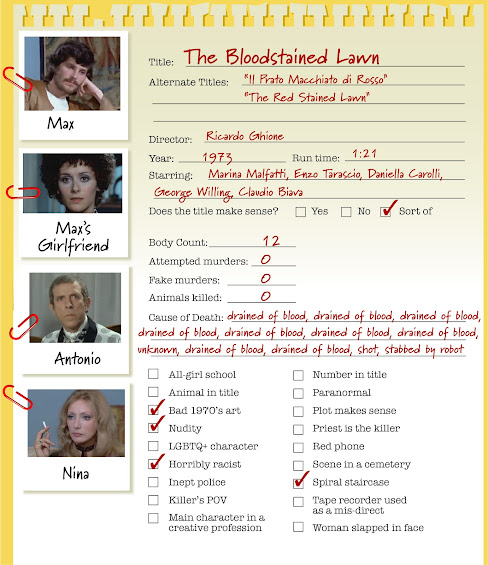 "I hate planning for anything. Studies, love..."

While hunting down smugglers, a UNESCO agent (Nino Castelnuovo) discovers a crate of wine bottles filled with human blood. Elsewhere, Alfiero (Claudio Biava) drives around the countryside rounding up random strangers - a drunk, a prostitute, a Romani girl and a pair of hippy hitchhikers - and brings them back to the estate owned by his sister Nina (Mariana Malfatti) and her scientist husband Antonio (Enzo Tarascio). Max the hippy (George Willing) and his girlfriend (Daniella Carolli) soon get creepy vibes from Antonio's collection of macabre robots, Nina's talk of developing a master race of supermen and the sudden disappearance of the Romani girl (Barbara Marzano). What grisly experiments is Antonio really working on? Is Nina a vampire? And will the UNESCO agent solve the case before more people die?

The Bloodstained Lawn (not to be confused with The Bloodstained Shadow, The Bloodstained Butterfly or Seven Bloodstained Orchids) is a wild ride and, to be honest, I hesitated before adding it to the list. It does technically meet all four of my criteria but, while a lot of gialli find a foundation in gothic horror, this film seems to find its inspiration the world of science fiction. The film abounds with crazy nonsense moments, absurd mis-directs and laughable effects. Very little of it makes sense, but if you enjoyed the insanity of Spasmo, you might really like this one.

• The film begins with a title pop song over the opening credits - highly unusual for a giallo.

• Please note that seven of the deaths listed in the body count listed above occur before the action of the movie starts. These were the bodies discovered in the basement freezer late in the film.

• The title has nothing to do with the plot, but when Max & his girlfriend are hitchhiking, she remarks on a beautiful field of red flowers and he replies that it looks like a bloodstained lawn.

• Even though the cast is very small, only a few of the characters actually get names.

• Despite the film being a hot mess, the cast features some real talent. You may recognize Marina Malfatti from The Red Queen Kills Seven Times, Enzo Tarascio from The Designated Victim and both George Willing and Dominique Boschero from Who Saw Her Die?

What the Hell am I watching?

A lot of the craziest moments involve the characters being very comfortable with nudity, so there won't be photos. But I must mention the naked, drunken go go party that takes place in a hall of mirrors and the odd shower scene where wine starts pouring out of the shower head instead of water.

Here's a look at the absurd-looking killer robot that Nina tries to pass as a piece of modern sculpture. It looks like a giant beer keg with a super hero cape.

I'd be remiss if I didn't mention that the retractable arm of the robot looks a lot like the spiked glove in Blood and Black Lace.

Antonio immediately telegraphs his eccentricity (if not lunacy) with his outrageous choice of neckwear. We learn midway through the movie that these are actually straight ties, which he knots into ridiculous floppy bows.

Rich and bored Nina is a fashion standout, especially in this evening gown with a JLo neckline.

Nina apparently outfits all of her guests with new clothes for the aforementioned go go party. They're all looking rather sharp before things get wild.