The Crimes of Petiot 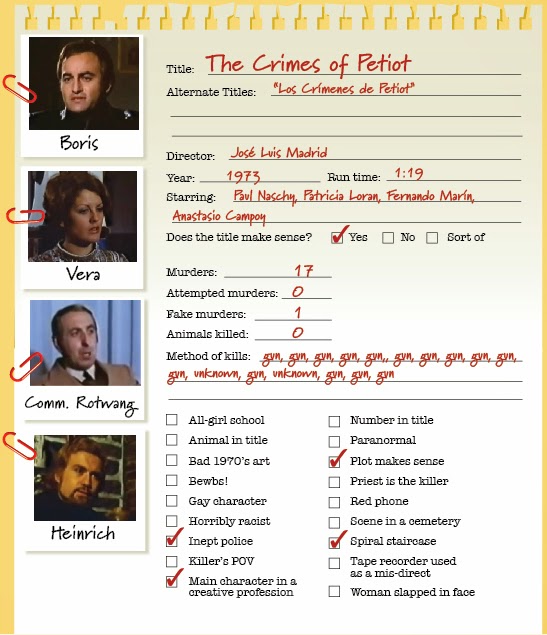 The Crimes of Petiot

In this climate of intrigue, everyone seems suspicious.

A shadowy, black-coated killer is on the loose in Berlin's West Park neighborhood and he has a very specific pattern. Each time, he targets couples with a dark-haired woman and a blond haired man, shoots the man in the head with a Luger, leaves behind a Nazi emblem, and takes the woman to the abandoned tunnels beneath the city. There, he makes her listen to a bizarre tape recorded rant about vengeance against a woman named Madeline before shooting her.  Reporter Vera (Patricia Loran) and her colleagues decide to catch the killer on their own, against the objections of Vera's boyfriend Boris (Paul Naschy) and Police Commissioner Rotwang (Anastasio Campoy). But when the reporters' trap goes horribly wrong, the killer sends a message that they will be his next targets.  Could the killer actually be one of the reporters? And why does the killer strike in such a specific way? The police seem to be no help, so Vera and Boris must find the killer before he strikes again!

The Crimes of Petiot (not to be confused with The Crimes of the Black Cat) has a brilliant and engaging premise and would be a top-tier giallo if the tight storytelling springs didn't wind down in the second half. Once again, star and co-screenwriter Paul Naschy has crafted a high-body count vehicle for himself which, like Antonio Bido's Watch Me When I Kill, touches on the horrors of the Second World War for some somber gravity. If only more thought was put into the story logic and the killer's ultimate motive, this would have been a far better movie.

There are plenty of opportunities for nudity here - gratuitous shower scenes, intimate moments - but the movie seems to actively avoid showing any actual nudity.

As a means of second-act exposition, the police show the reporters and Boris film of one of the victims getting shot - essentially a snuff film. Did civilians (and civilians who just received a serious death threat) really need to see that? It seems unnecessary at best and horribly irresponsible at worst.

Things get a little confusing at the end of the movie when Paul Naschy plays a completely different character during a flashback. 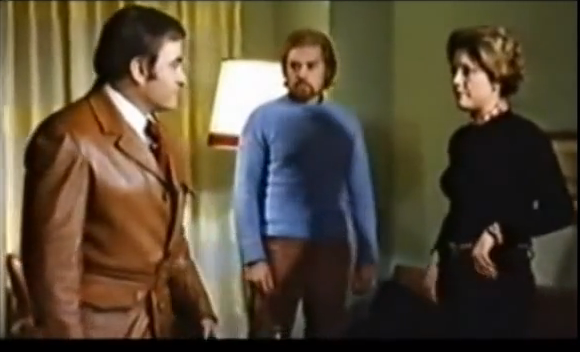 And this black leather blazer is just for lounging around the house. 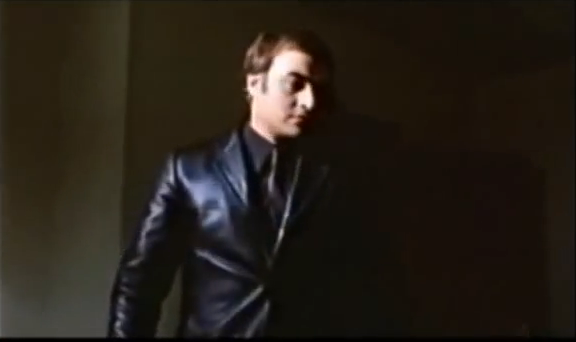