Black Belly of the Tarantula 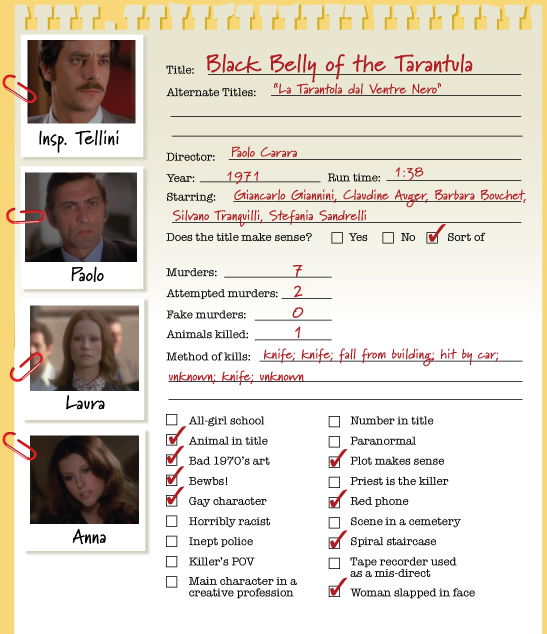 Black Belly of the Tarantula

"As long as I'm free I can look for the murderer my own way."

Inspector Tellini (Giancarlo Giannini) is on the trail of a sadistic killer who first paralyzes his victims with an acupuncture needle before taking his time, slicing them open with a knife. The investigation leads Tellini to a cocaine smuggling ring and a blackmail operation. But how are the victims involved and what connects the crimes? Could the first victim's uncooperative husband (Silvano Tranquilli) be the killer? And who is the mysterious woman (Claudine Auger)  who shows up at every crime scene? As Tellini gets closer to uncovering the mystery, he and his wife, Anna (Stefania Sandrelli) find themselves in a dangerous game of cat and mouse. Will this case destroy the Inspector before he can bring the killer to justice?

Black Belly of the Tarantula is a really solid giallo with some interesting turns and red herrings. The sexy parts don't seem forced or gratuitous, but rather, are integrated nicely into the story – the investigation takes Tellini to a women's day spa, so there's a valid excuse for nudity.  There's a lot of great action, thanks to a rooftop chase scene and an attempted murder involving a staged car accident. The first kill of the movie is one of the most stylish giallo murder scenes ever. We see the black-coated killer struggle with his victim in silhouette, slowly drive the needle into her neck, and then cut into her belly with lots of thick blood. It's just a really well-crafted piece of filmmaking. Director Paolo Carara is best known for his exploitative shock documentaries, like Mondo Cane and, while that experience is evident in the gory first murder, Carara shows tasteful restraint throughout Black Belly of the Tarantula. Still, with a plot that hinges on such great elements as cocaine smuggling and blackmail, the ending is a giant letdown. It turns out that the killer's motivation (while it does make "giallo sense") was never foreshadowed, so the viewer has no chance of guessing the identity of the killer ahead of time.

Photos and film are confiscated from the blackmailer's home and the police detectives sit down in a theater to watch the footage – including a surveilance film of Tellini and his wife enjoying some grownup time.

The title sort of makes sense, but only as a weak metaphor. At one point in the movie, a forensic scientist makes an analogy between the killer's methods and that of a wasp, paralyzing its arachnid victim before killing it.

The wardrobe in The Black Belly of the Tarantula is pretty bland, everyday stuff.  But Laura's sea foam green coat and navy hat with matching gloves stands out in a sea of neutrals, as Tellini chases her down the street. 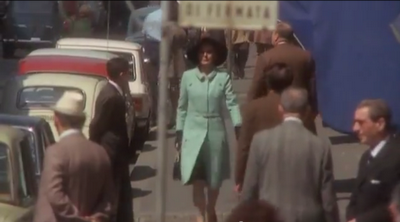 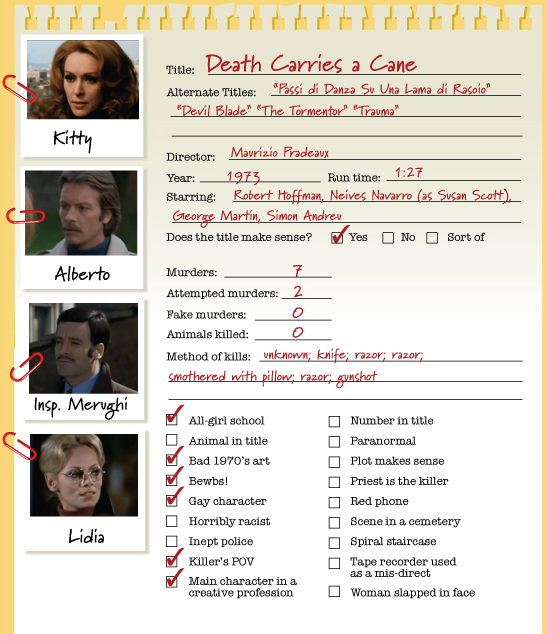 "You know, Kitty, I think you read too many detective novels."

While showing relatives the sights in Rome, photographer Kitty Hoffman (Neves Navarro, credited as Susan Scott) witnesses a brutal murder through an observation point telescope. Though she can't make out the killer's face, she does notice a few important details  – including the fact that the killer walks with a cane. As Kitty and her husband Robert (Alberto Marosini) are working on a musical revue with composer Marco (Simon Andreu), she continues to follow the case as more young women and witnesses to the crimes are murdered. Inspector Merughi (George Martin) and Marco's girlfriend, reporter Lidia Arrighi (Anuska Borova) are also keen to solve the case. What do the victims have in common? Does he know that Kitty was a witness – and if so, is her life in danger?

Death Carries a Cane is a classic-style giallo with several bloody murders, a twisty plot, a black-clad killer, a little humor, and lots of completely gratuitous sex scenes. I only wish it had a better resolution. The opening is a clever take on Hitchcock's Rear Window, though. It should be noted that Anuska Borova plays both good-girl reporter Lidia Arrighi and her twin sister, the petulant Silvia Arrighi. Most of the time, Lidia wears glasses, but sometimes it's difficult to tell who we're looking at.

In one completely baffling scene, Marco is distraught over the death of a dancer from his show and he mournfully plays her song on the piano. Things turn weird when Lidia arrives and the two start making the sexy eyes at each other. Nakedness ensues.

The film's big comic moment comes when Kitty agrees to lure the killer out by pretending to be a hooker. When a suspicious cane-wielding John picks her up the police swarm in... only to discover that the man is the Chief of Police.

What kind of grown-ups use the word "toodle-oo" to say goodbye?

Before (and during) a break-in at the dance academy, Kitty takes a pee-break. And we just sit around and wait until she's done. There is no reason for this to have been included in the movie.

This purse turns out to be an important way to lure the killer out of the shadows. 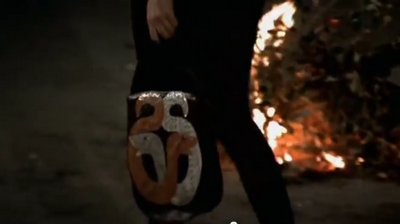 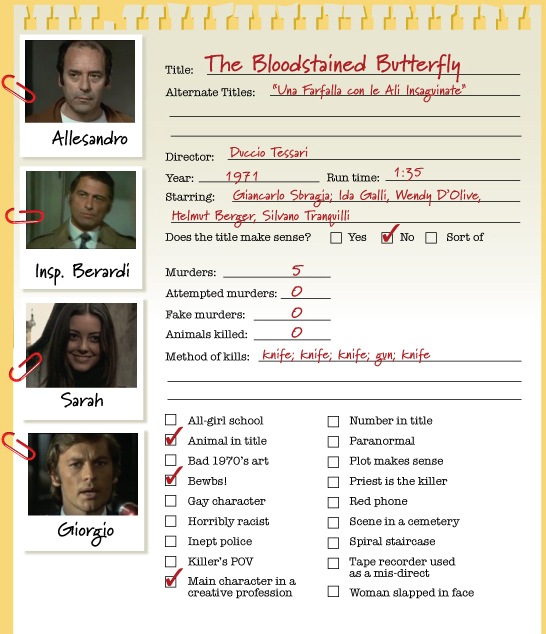 "It's very rare that so much massive and convincing evidence accumulates
against a person who committed a crime."

When a French teenager is murdered in a park in Milan, Italy, the police work quickly and efficiently to find the killer. After analyzing all the clues and eyewitness testimony, they arrest sportscaster Allesandro Marchi with a case built on state-of-the-art forensic science. Allesandro's wife Marcia (Ida Galli) and daugher Sarah (Wendy D'Olive) put their faith in attorney Giullio Corrado (Günther Stoll), who refutes the evidence, piece by piece. But as the case unfolds, deeper layers are exposed, secrets are unearthed, and allegiances shift. Is someone framing Allesandro? Who would benefit from his conviction? And is Sara's boyfriend Giorgio (Helmut Berger) hiding a connection to the case? Things aren't looking good for Allesandro... until another dead body turns up.

The Bloodstained Butterfly (not to be confused with The Bloodstained Shadow) is a rarity in the world of giallo: the mystery unfolds largely in a courtroom.  Through flashbacks and character interactions between court sessions, we slowly learn the truth about the girl's murder. The clever writing allows us to consider and re-consider the evidence as it develops, just like a jury would. Giallo is a genre that keeps looking to Hitchcock for inspiration and this one seems to get a lot of cues from The Wrong Man.
What the Hell am I Watching?

There's a scene where Sarah laments her father's situation and digs for some affection.  Sullen Giorgio clearly doesn't pick up on her signals.

Sarah: Poor father, He's the only person who truly loves me.

Giorgio: Give me a cigarette please.


Shortly after this, they share a weirdly aggressive and emotional sex scene. It's hard to tell if they're angry at each other, hurting each other, or enjoying themselves. The reason for this becomes clear by the end of the film. 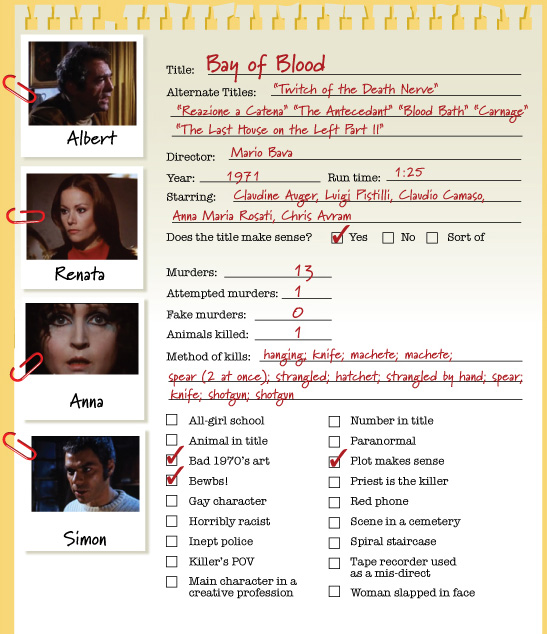 "The sickle of death is about to strike!"

Countess Frederica Donati (Isa Miranda) is murdered by her husband... who is then immediately murdered by a shadowy figure.  Bickering couple Renata (Claudine Auger) and Albert (Luigi Pistilli) are willing to do anything to make sure they inherit her estate, which includes the valuable land around a seaside bay. Environmentalist Paolo (Leopoldo Trieste), his Tarot-reading wife Anna (Laura Betti), Estate lawyer Frank Ventura (Chris Avram), Frank's girlfriend, Laura (Anna Maria Rosati), and the Countess's illegitimate son, Simon (Claudio Camaso, credited as Claudio Volonté) each have their own plans for that land and are ambitious enough to eliminate anyone in their way.  Add a quartet of trespassing hippies into the mix and this land grab turns into a real bloodbath. It might take a few viewings to sort out who killed who and why.

Bay of Blood (or, if you prefer, Twitch of the Death Nerve) is a true pioneering film of horror cinema. It's clear to see how this film, with its inventive, gory kills and wooded setting inspired the original Friday the 13th – In fact, several murder scenes in Friday the 13th are shot-for-shot remakes from Bay of Blood. The hatchet-to-the-face effect was also famously mimicked in Day of the Dead. Take out the character motivations and simplify the story and you've just invented the slasher flick. Unfortunately, few slasher flicks are as lovingly shot, artfully composed, and feature the vivid, saturated colors of a classic Bava production.


What the Hell Am I Watching?
There are quite a few inventive murder scenes (hippie-kabob, anyone?) but the best shock is seeing the Count's green, decomposing face with a live octopus crawling over it.

The true "What the hell am I watching" moment is the entire 20 minute segment with the hippies, starting with their arrival in a yellow dune buggy, like Hannah Barbara cartoon characters. Except for one kid's mild objections, they have no problem breaking into a house while the owner is away, lighting a fire, blasting the music, and making a giant mess.

Fashion Moment
Luigi Pistilli has a thing for turtlenecked fisherman sweaters, doesn't he? But, no, My favorite outfit is Anna's flowy gypsy robes, oversized jewelry, and curly shock of hair. She looks like Grace Slick playing the role of Helena Bonham Carter. 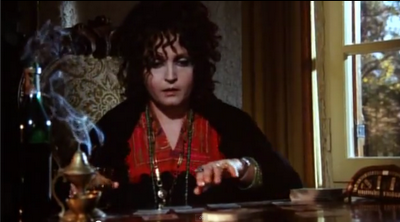