"You get him and we can bust the whole operation."

After police Detective Tony Giordani (Michael Woods) and his professional - and secret romantic - partner, Lisa Bonetti (Kay Rush, credited as Kay Sandvik) botch a drug bust, a mafia hitman takes out Tony's ex-wife, Elvi (Gianna Paola) and wounds Tony.  Upon recovering, Tony finds photos of an abandoned house that Elvi took shortly before her death and realizes that she was targeted because of an incriminating detail in the photos. His investigation leads to homicidal psych ward patient Mrs. Beaumon (Annie Girardot), who holds answers in the cold case of the Full Moon Killer, who decapitated his redheaded victims before his murder spree came to a sudden and mysterious end. Could the killer be Mrs. Beaumon's creepy psychiatrist (Yves Collington)? Or perhaps it's the shifty-eyed legal aide (Pier Paolo Palladino). Tony and Lisa must hurry before the killer strikes again!

Ohmygod this movie is awful. Hilariously, watchably awful. But Circle of Fear (not to be confused with Rings of Fear) is a different kind of awful than you might expect. The filmmakers cram way too many ideas into the scant 78 minutes of screen time, trying to touch every base, including Rambo-style shootouts, narcotics cop drama, sexy thriller, serial killer mystery, heist movie, and mobster movie.  And it includes just about every laughably obvious cliché that those genres are famous for. There are so many ideas, in fact, that most of them go unresolved, including the narcotics investigation that starts the plot. Legendary giallo director Aldo Lado used a pseudonym on his credit and for very good reason.

Where does this movie take place? It starts off at a restaurant in a pagoda, which implies that we're in southeast Asia, but then the action moves to a Western-style city. The cars have European license plates and the parks have palm trees, so I'm inclined to think that the movie is set in Italy.

The most eye-rolling and shameless appropriation is a large chunk of the movie lifted almost verbatim from Silence of the Lambs, when Tony visits Mrs. Beaumon in psychiatric solitary confinement. Her creepster psychiatrist gives strict instructions – stand away from the glass, don't pass her any objects, etc. - and he enters in darkness, staring at his own reflection before she emerges, Hannibal Lechter-like from the darkness. This whole plot thread continues exactly as in Jonathan Demme's Oscar-winning film and this painfully feeble copy only serves to highlight how beautifully written, acted, and directed Silence of the Lambs really was.

There are two crazy 80's-style shootouts in restaurants. In the second one, Lisa pulls out a shotgun from nowhere and just starts blasting away.

This movie appears to have been made with no concern for depicting police procedure (and, in fact, rational human behavior) in a realistic fashion. The examples are countless, from the way the cops enter a room to how they hold their guns, to the fact that Tony, the victim of a failed assassination attempt, gets no police protection upon returning home. And he doesn't think twice about opening his door to strangers.

Also, imagine how difficult, messy, and time-consuming it would be to sever a human head using only a switchblade.

At the end of the movie we see someone commit suicide by gun. Then he gets up, grabs a knife, and stabs himself in the chest. It's so stupid your brain might just explode. 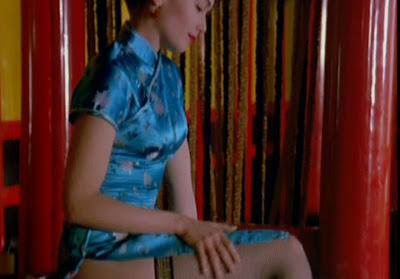 Later on, she totally rocks the asymetrical top-pony tail. 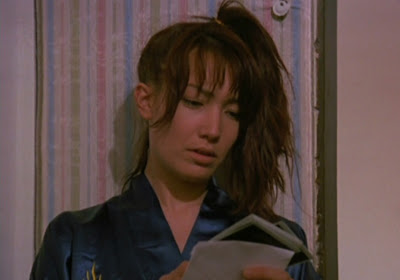 Also, this mafia thug keeps up the long-standing giallo tradition of hitmen in mirrored sunglasses. 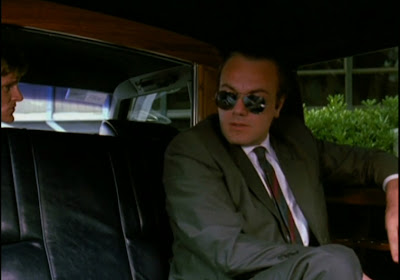 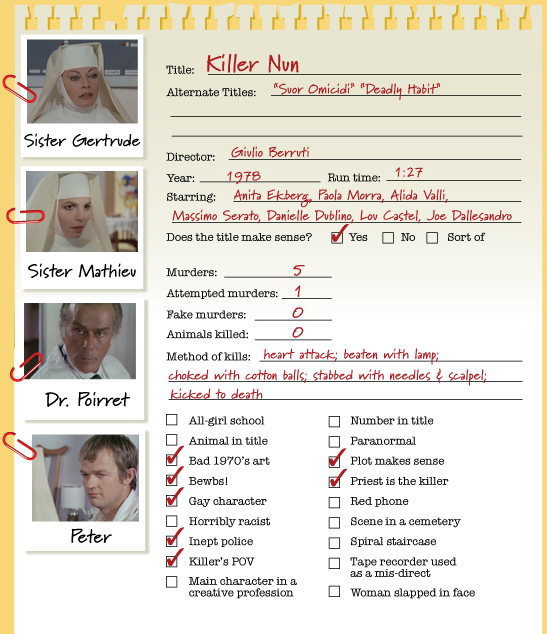 "Sister Gertrude, it is a nun's vocation to suffer."

After her recent brain surgery, Sister Gertrude (Anita Ekberg) has developed serious headaches, suffers from blackouts, and has become addicted to morphine. Her violent and cruel outbursts have made her hated among the patients and staff at the hospital where she works and only the fawning young nun, Sister Mathieu (Paola Morra) takes her side. So when patients start turning up dead, Sister Gertrude is a prime suspect – even though she has no memory of committing the crimes in her drug-fueled haze. Did she really kill her patients or is someone framing her?

Killer Nun is a giallo, but it crosses over with the short-lived genre known as "Nunsploitation," wherein nuns are depicted engaging in various shocking and unholy behaviors. Here, Sister Gertrude mainlines morphine, has sloppy hallway grownup time with a random man, bullies a woman into bed, and engages in Machiavellian politics to eliminate those she deems a threat. And she still manages to function as the Nurse Rached-like taskmaster of her hospital ward.

Sister Gertrude and Dr. Poirret (Massimo Serato) have what should be a very private conversation in the middle of the hall. They discuss the Sister's private medical history, addiction, and mental illness while surrounded by gawking nurses and patients.

During mealtime in the dining hall, Sister Gertrude reads to the patients about Catholic martyrs getting tortured in brutal and graphic ways. And then she wonders why no one is eating and why everyone hates her.

When an elderly patient dies of heart failure, her roommate has to spend the night in the room with the dead body. No one objects or even suggests other arrangements.

Two of the patients enjoy secret sexytimes in the rain. One of them is an old man who is confined to a wheelchair. The subsequent murder scene is rather well staged, though – we see it only in flashes of lightning.

Normally, a giallo movie ends with the arrest or death of the murderer but in Killer Nun, the murderer is revealed but gets to walk free.

At the convent, Sister Gertrude is kept in a prison-style cell with an iron door that locks from the outside and a tiny food-tray slot. Why would a convent have that? How frequently do they need to lock up killer nuns?

There's a lot of white in this movie. Uniforms, habits, dressing gowns, curtains, walls... everything is stark white.  So when Sister Gertrude ditches her habit and takes the train to the city to score some morphine, it's a different world. After selling the ring she stole from a dead patient, she heads to the Rainbow Brite Lounge to get her swerve on. 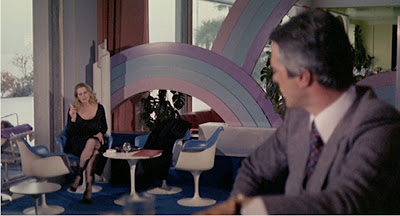 Dig those tulip chairs and post-modern decor. Notice that Sister Gertrude ditches her pure white vestments for a low-cut black dress when she goes on her sin binge. That's some pretty heavy-handed symbolism right there.

Here's a closer look at Sister Gertrude. Apparently, her order is the Sisters of the Clumpy Mascara. 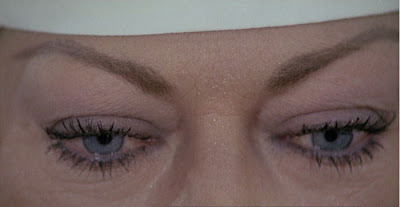 Mother Superior (Alida Valli) seems to have a keen interest in fashion. In this scene, she appears to be looking over fashion illustrations for forward-thinking new nurse's uniforms. 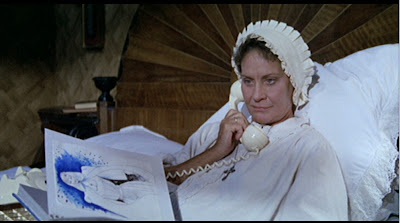 Oh... and remember the time Peter flashed his underwear while climbing up the cellar stairs? 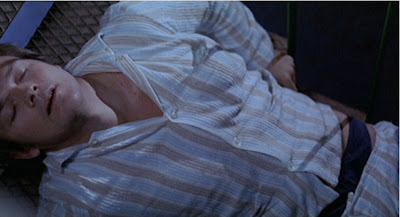 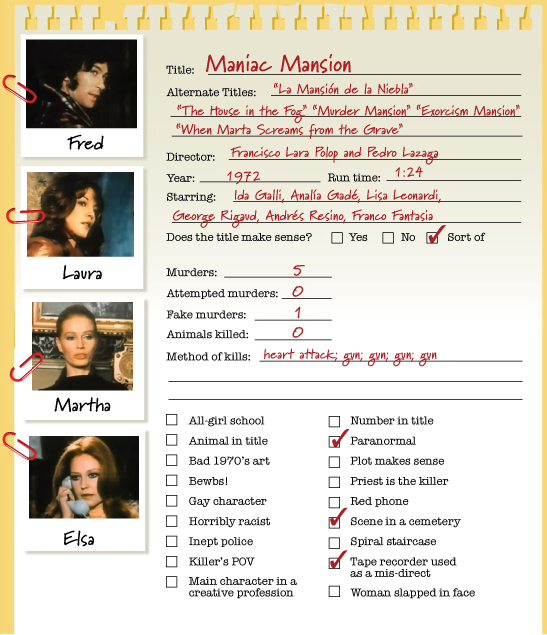 Lost in a fog late a t night, five travelers take refuge in a dark abandoned mansion. The group includes motorcyclist Fred (Andrés Resino), hitchhiker Laura (Lisa Leonardi), lascivious Mr. Porter (Franco Fantasia), skittish Elsa (Analía Gadé), and the Tremonts (Yelena Samarina and Eduardo Fajardo). They soon find that they are not alone when the house's owner, Martha (Ida Galli, credited as Evelin Stewart) appears from the darkness. Her tales of a witch ancestor and local legends about vampires terrify Elsa, who was attacked by mysterious figures in the cemetery outside the house. What are the eerie clawing noises coming from the cellar? Is the house really inhabited by zombies or vampires or ghosts? Or is there a more diabolical – and human – explanation behind this mystery?

Ugh, this movie.  Maniac Mansion (not to be confused with Slaughter Hotel) is a bit of a bait-and-switch. After a slow and meandering exposition the movie ratchets itself up as a standard Gothic tale with all the manufactured atmosphere and production value of a carnival's haunted house ride. It's not until the last fifteen minutes that it reveals itself to be a giallo.  The mystery isn't in figuring out the identity of a killer, but in unraveling the ultimate motives of an overly-elaborate scheme.
What the Hell Am I Watching?

The creepiest thing in the movie isn't the spooky atmosphere or the zombie vampire witches – it's learning about Elsa's daddy issues. Her father (George Rigaud) died of a heart attack while having an affair with her best friend in Elsa's bed. (*shudder*) In a flashback, we watch her take revenge by sleeping with her future no-good husband Ernest (Alberto Dalbés) in her father's bed.

They keep referring to the nearby city as "Mullen." Is it possible that they're all mispronouncing "Milan?"

Martha's luxurious silk robe stands out as the only pop of color in this drab little movie. 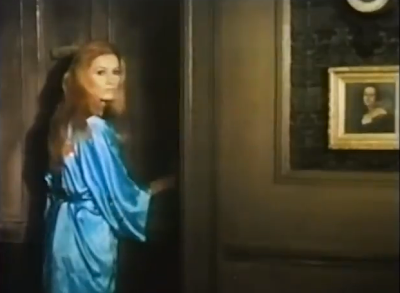 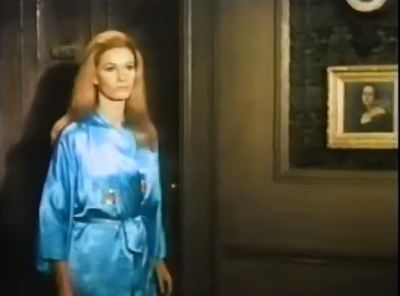 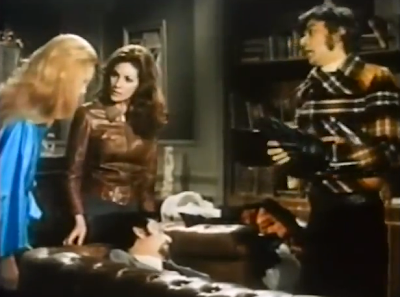 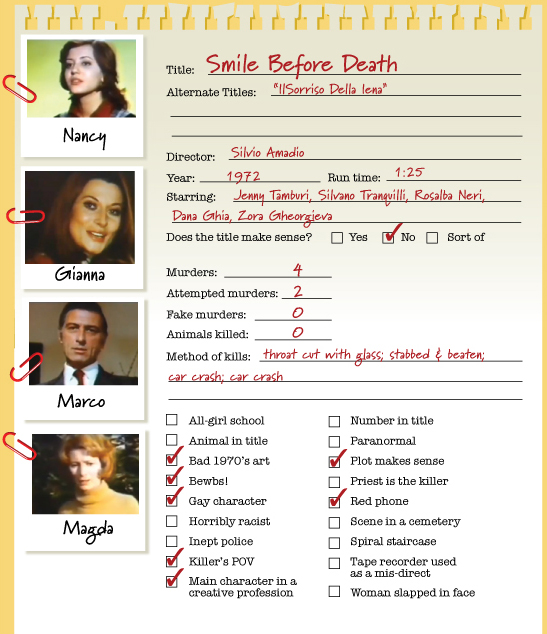 "She's a girl who knows how to make herself liked. And you have to hate someone to kill them."

Teenager Nancy Thompson (Jenny Tamburi) returns home from boarding school after her mother, Dorothy (Zora Gheorgieva) dies of an apparent suicide. She moves into the family's cottage with her mother's best friend, photographer Gianna (Rosalba Neri) and her stepfather, Marco (Silvano Tranquilli), who are having a not-so-secret affair. But when Nancy's relationship with Marco becomes closer, she starts to wonder if her mother's death was really an accident. Could Marco or Gianna have killed Dorothy? Or perhaps it was the housekeeper, Magda (Dana Ghia). In her search for answers, Nancy finds herself walking a dangerous tightrope – but is she really the innocent girl she appears to be?

Smile Before Death (not to be confused with Death Smiles on a Murderer) is basically a clumsy re-tread of Sergio Martino's Your Vice is a Locked Room and Only I Have the Key, wherein an innocent-looking young girl inserts herself between a couple that shares a murderous secret, playing both sides to her own advantage. It's still entertaining, though, full of twists and double crosses and a clever and surprising resolution. But the storytelling relies too much on flashbacks and most of the movie is a long, bloodless stretch between the opening death scene and the three kills at the very end with characters plotting against each other.

Shortly after she arrives, Nancy eagerly models for Gianna's photos, trying on different looks and acting out different personalities. Later, while reviewing the pictures, Nancy declares that none of them capture the "real her." She asks Gianna for an impromptu photo session and... well, apparently the "real" Nancy is naked all the time.

In fact, Nancy starts off shy and demure but after only a few days (and a brief montage to show her personal growth) she has no problem stripping in front of people, even at the most inappropriate times.

Smile Before Death lets you know right off the bat that it's a giallo, by showing a wounded, bloody Dorothy writhing on the floor in this frilly yellow ("giallo") housecoat. Or maybe it's an evening gown. It's hard to tell. 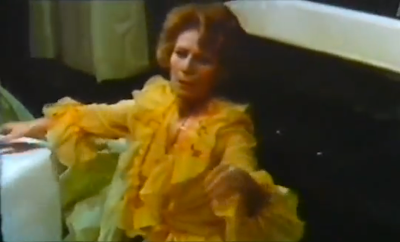 Later, during the aforementioned fashion shoot montage, Nancy acts out different roles including a Hollywood vixen, a sex kitten, a high-society fashionista and... a squirrel? 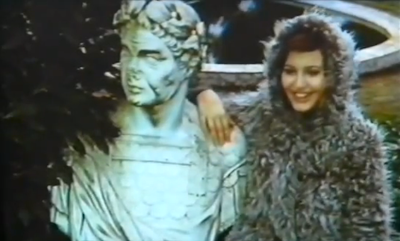