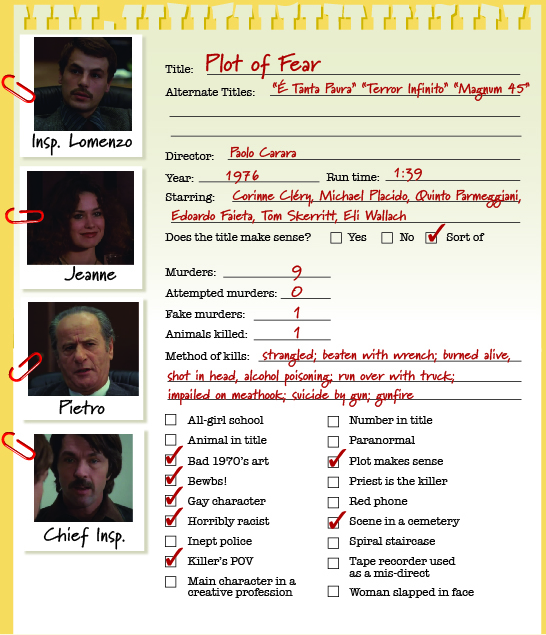 "Just love each other and be happy."

On the same night that a wealthy businessman is strangled in his home, a woman trapped on a bus is bludgeoned to death with a wrench - two seemingly unrelated murders linked by a killer's calling card: pages torn from a Medieval German children's book. Inspector Lomenzo (Michael Placido) is on the case and he soon links the victims to a "fauna lover's club," which is actually a kinky sex society. Lomenzo starts a relationship with one of the club's members, Jeanne (Corinne Cléry) who witnessed the accidental death of a prostitute at one of the gatherings. Soon, more members of the club are killed off in grisly fashion. Is someone taking revenge for the girl's death? Is her pimp to blame or is there more than meets the eye? Inspector Lomenzo must untangle a twisted web of blackmail, lies and coverups to find the real killer.

Plot of Fear (not to be confused with Circle of Fear or Rings of Fear) is a devious little murder mystery with a conclusion that keeps twisting in on itself into a neat spiral, until the real killer is finally revealed. Though it's not very bloody, this movie features a wide variety of interesting murders, an engaging mystery plot, a few sexy scenes, a bit of sleaze and touches of humor. Director Paolo Carara is best known for his exploitation "shockumentary" Mondo Cane and the classic  Black Belly of the Tarantula, and, with the help of Deep Red co-writer Bernadino Zapparoni, crafted a fine late-period giallo.

At the beginning of the movie, Lamenzo is living with Ruth (Mary Ruth League), a beautiful African-American model. He is, unfortunately, not sensitive enough not to be a racist jerk to her. No wonder she leaves him for an English photographer.

There are a couple of good chase scenes in Plot of Fear but nothing beats the scene where Lomenzo fistfights a suspect while they're handcuffed together.

Spoiler Alert:
Normally in a giallo, we look for a single murder suspect who has the opportunity, means and a motive. But in Plot of Fear, it turns out that each murder was committed by a different person, each of whom was being controlled by a single puppet master, who was acting on the motives of yet another character. It's a fascinating twist on the formula: nine killers with opportunity, one with the means and one with the ultimate motive. Instead of narrowing down the suspects, the detectives needed to broaden their view and then follow the thread back to the one person responsible for the killings.

Ruth is the fashion standout of the movie. She looks great in white and the breezy flowing styles speak a lot to her character. 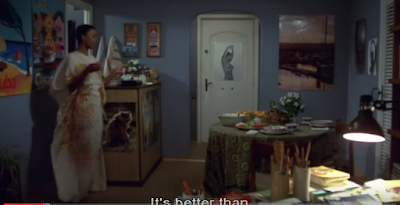 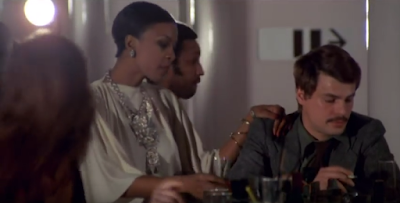 But let's take a moment to admire Jeanne's outfit in this scene, with her bulky fur, tight leggings and wide belt. 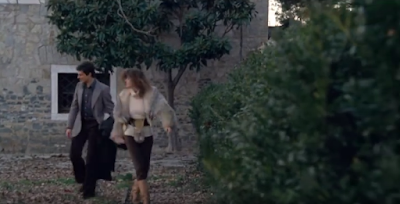 She looks like she's on her way to star as the Rum Tum Tugger in a Rule 63 production of Cats.

Finally, in the opening shots of the movie, we're treated to a view of the first victim's apartment in all of its technicolor glory. 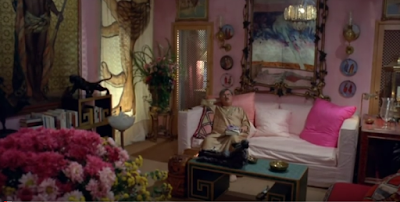