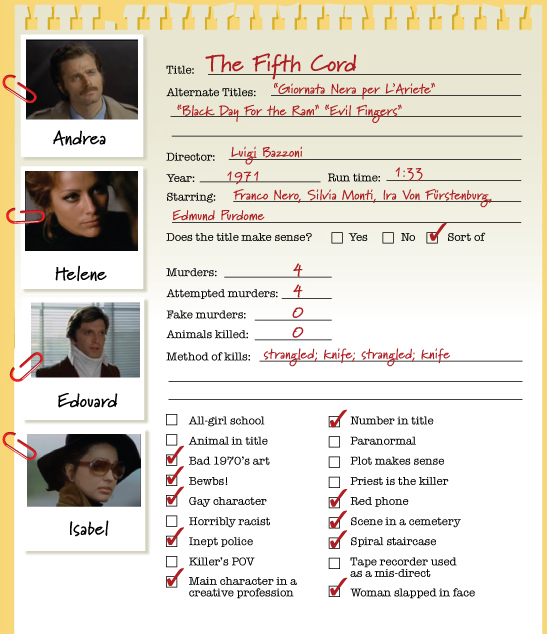 "When I drink I forget things. It makes life much easier."

Andrea Bild (Franco Nero) is an alcoholic reporter with a troubled personal life, who finds that he is a suspect with no alibi when his enemies and acquaintances start turning up dead. But who would try to frame him? At the scene of each crime, the killer leaves a glove with a successive number of fingers cut off – counting down the number of murders he plans on committing. Now, Andrea must find a connection between the attacks, discover the murderer, and clear his name.

Franco Nero may get top billing in The Fifth Cord, but the real star of this film is cinematographer Vittorio Storaro. The Fifth Cord is not only one of the most beautifully-shot gialli ever, but it stands up against some of the greatest cinematography of all time. Storaro would go on to win three Academy Awards for his work on Reds, Apocalypse Now, and The Last Emperor. Though The Fifth Cord is available on YouTube, do yourself a favor and watch it on a big screen on DVD instead, to take in the astonishing beauty of Storaro's artistry.  It's a shame, however, that the sub-par script with its anticlimactic, cop-out ending doesn't meet the same standards as the cinematography.

The Fifth Cord is a slow, steadily-paced movie with no big surprises. Except maybe the scene where Andrea follows a suspect to a live sex show. Or the shot of sweaty, exhausted Andrea chugging a bottle of J&B while driving down the road at night. Tell you what: not to keep harping on this, but  the jaw-dropping camera work is the most astonishing thing about this movie. Let's enjoy: 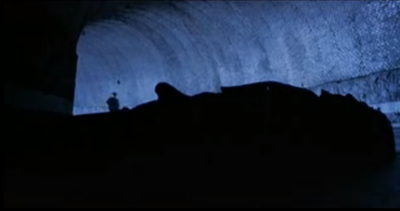 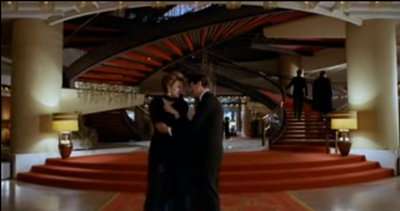 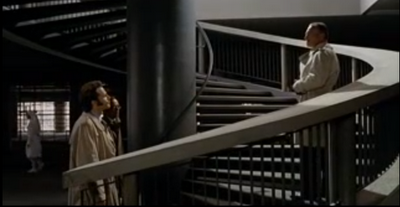 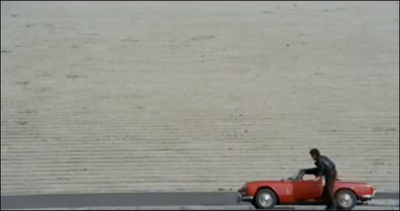 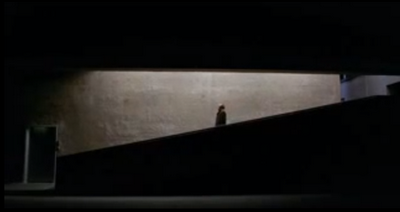 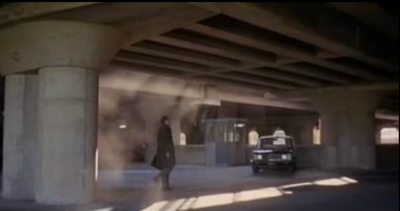 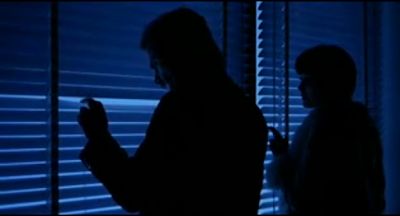 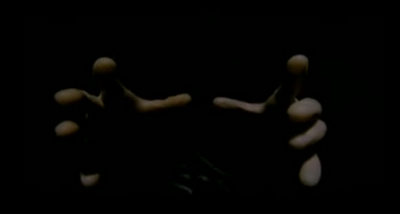 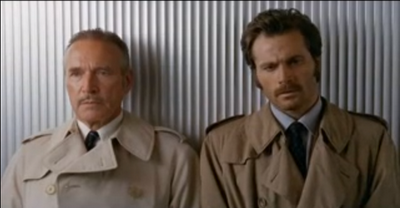 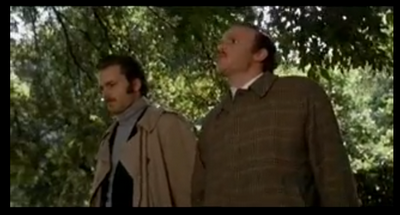 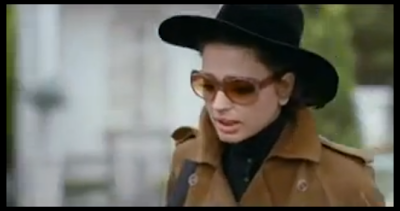 Blue Eyes of the Broken Doll 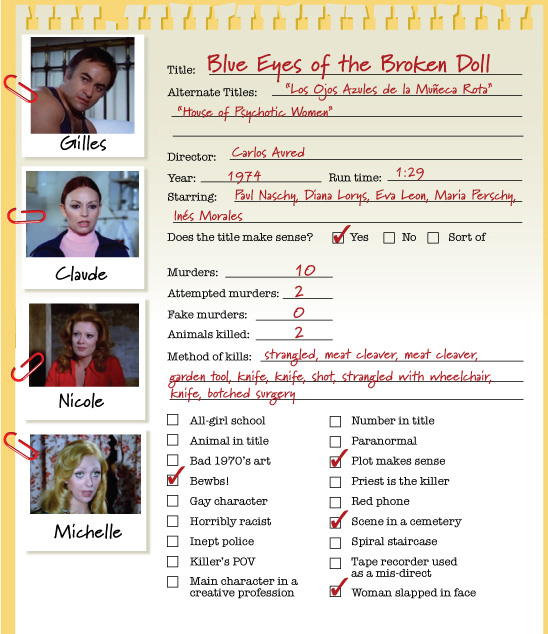 Blue Eyes of the Broken Doll

"Listen... I advise you not to get any ideas about my sisters."

Gilles (Paul Naschy) is a drifter and an ex-con haunted by visions of strangling women, who finds work as the caretaker of a secluded old estate owned by three sisters. Claude (Diana Lorys) hides mysterious scars and wears a prosthetic hand; hot-blooded sexpot Nicole (Eva Leon) is the youngest; Ivette (Maria Perschy), is beautiful, but confined to a wheelchair. Ivette's new nurse Michele (Inés Morales) is a substitute and we soon learn why – the regular nurse was murdered on her way to the estate. By night there's a lot of bed-hopping. Nicole seduces Gilles, Gilles seduces Claude, Nicole throws herself at Ivette's doctor, and Gilles attempts to rape Michelle. Meanwhile, the killer keeps striking, murdering pretty young girls of the village and gouging out their eyeballs. Gilles has a history of violence, but is he the murderer? Could Michelle be responsible? Or is it the disgruntled previous caretaker? Perhaps one of the secretive sisters is hiding something from her past that holds an important clue.

Believe it or not, the title Blue Eyes of the Broken Doll actually does make sense in a metaphorical way, though it's not entirely apparent until the final moments of the film. This is a pretty good giallo, with all the sexy scenes in the first half hour, followed by a quick succession of murders in the last half using some creative murder implements. It relies heavily on the traditions of Gothic horror, set mainly in a dark Victorian mansion in a small town populated by suspicious, fearful villagers. But while there's a decent twist ending, there are more questions raised than answers.

This movie has the weirdest musical cues ever. Aside from "Frere Jacques" (which can be quite creepy in the right setting,) the other main theme is a peppy little ditty played on a Hammond organ, that sounds like roller-rink music.  Or like incidental music from "The Brady Bunch." This same happy tune is used (or, rather, mis-used) for suspenseful scenes, murder sequences, love scenes, and everyday background music.

Gilles' flashbacks to strangling his girlfriend are truly weird. They're staged like the fantasy ballet scenes in Oklahoma or Singin' In the Rain – vast, white open spaces with no horizon, colored lights, and a wind machine. But instead of a romantic pas de deux, he has his hands around her throat.

Nicole's wardrobe is all bright, flashy colors and tight jeans, but to me, the most striking sister is Claude. She goes from frumpy to feminine when she finds love, and the transition is marked by this outfit: a plain brown sweater and fashion-forward plaid pants. It's the first time we really take notice of her. 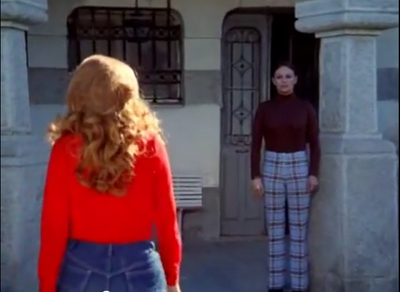 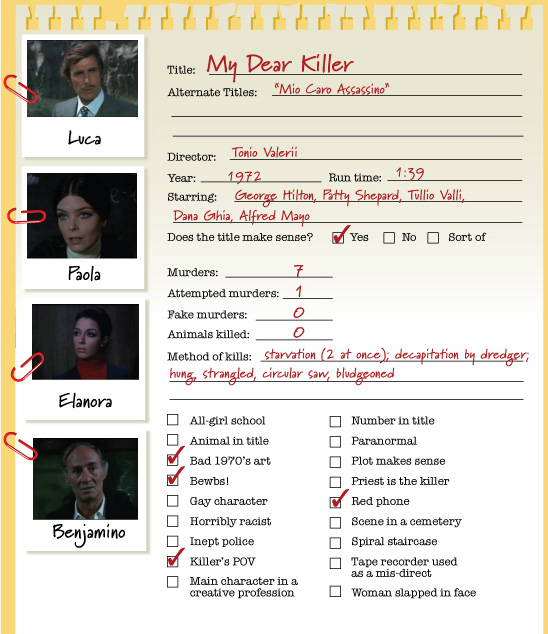 "Nobody Ever Knows Anything"

When an insurance adjuster is decapitated with a dredger, Police Inspector Luca Peretti (George Hilton) is on the case. Peretti soon discovers that the dead man was investigating the kidnapping and murder of a girl and her father and that the killer is eliminating everyone who gets too close to the truth. The investigation leads to a post office box, the victim's drawings, a broken statue, and a house with a crooked chimney, but how do the clues add up? Someone in the victims' family might hold the answer but, while they all say they want to find the truth, everyone seems to have something to hide.

This movie has some clever ideas and two very well-staged murder scenes (the sight of a body hanging from the claws of a dredger is both hilarious and horrifying; the circular saw murder is gruesomely realized) but try to make sense of the story and motivations and everything falls apart. Don't expect a lot of skin or gore (aside from those two aforementioned scenes) because this is a straight-up procedural. And not a very good one – it's sad that the writers couldn't give the killer any clear motivation. George Hilton does a great job as always, though, and effectively holds the movie together.

Marilú Tolo appears in two completely superfluous scenes as Anna, Peretti's sullen, neglected  girlfriend. Perhaps these scenes were included to give Hilton's character more dimension, but they really stop the movie dead in its tracks.

One of the victim's uncles, Benjamino (Alfred Mayo) is a sculptor. As Peretti is questioning him in his studio, a naked nine-year-old girl appears suddenly in the doorway. Benjamino shoos her away and explains that the girl is a model for his sculptures. And Peretti totally accepts that as a valid explanation for being completely alone in his apartment with a naked nine-year-old girl. I know this is supposed to throw suspicion on Benjamino, but really? Not cool, movie. Not. Cool.

In his long sideburns, caterpillar mustache, and wool three-piece suits, George Hilton is serving up some serious Ron Burgundy realness in this film.

The Sweet Body of Deborah 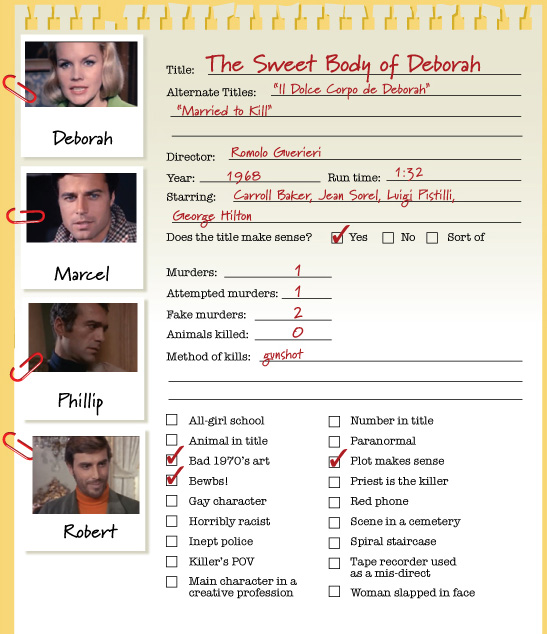 The Sweet Body of Deborah

Newlywed jet-setters Deborah (Carroll Baker) and Marcel (Jean Sorel)  are honeymooning in Europe, but visiting Geneva brings back bad memories for Marcel, whose ex-girlfriend Suzanne (Ida Galli, credited as Evelyn Stuart) was killed there years ago under mysterious circumstances. In fact, when Marcel runs into his old friend Philip (Luigi Pistilli), he is accused of murdering the woman he once loved. After that, Deborah is besieged by threatening phone calls and notes and begins to wonder if her husband could be capable of murder. Neighbor Robert (George Hilton), who prefers the term "voyeur" to "peeping tom" adds even more stress to Deborah and Marcel's relationship. Is Deborah getting Gaslighted? Is Suzanne sabotaging the marriage from beyond the grave? Or is a more diabolical plan in motion?

The Sweet Body of Deborah (not to be confused with Your Sweet Body To Murder) isn't a great giallo. The body count is low and the setting moves around so much that the pool of suspects stays small. But what The Sweet Body of Deborah lacks in big scares and blood, it makes up with lots of grown-up time. Carroll Baker is certainly not shy about her body in this movie and she has obvious chemistry with Sorel, who looks like a young, Gallic Robert Redford.

What the Hell Am I Watching?
Let's talk about the scene where Deborah and Marcel play an outdoor game of Twister. That is a thing that happened in this movie.  Let's also talk about the pop art comic book-themed nightclub with "POW" and "CLANG" drawn on the walls in the style of the 60's Batman TV show. And there's also a wall of what appears to be Doctor Who cybermen. Groovy, man.

Fashion Moment
Deborah sports some great outfits in this movie, but none is more eye-catching than the lime green knit catsuit she wears during the aforementioned Twister match. 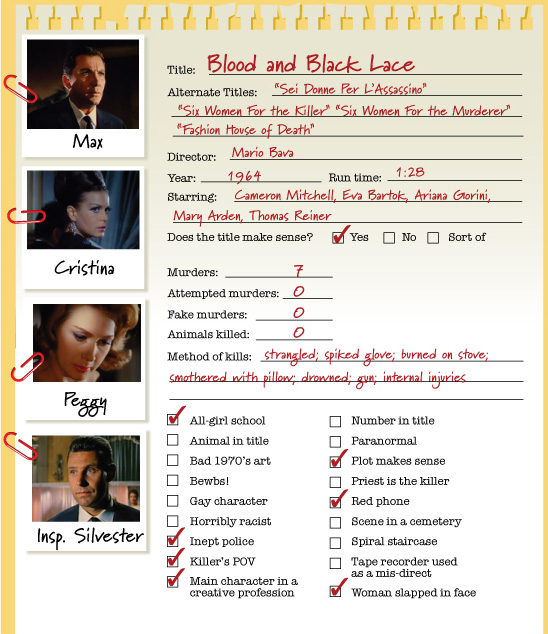 "Perhaps the sight of beauty makes him lose control of himself and kill."

When fashion model Isabella (Francesca Ungaro) is brutally murdered, her colleagues at the Christian Couture fashion house are distressed. But when her diary surfaces, filled with the details of a complex web of blackmail, everyone wants to get their hands on it to keep their secrets from being exposed – and one person will even kill! As the diary changes hands, the models are murdered one by one by a faceless figure in black. Could one of the implicated models, like Peggy (Mary Arden) or Greta (Lea Lander, credited as Lea Krugher) be responsible? Or was it Max Marian (Cameron Mitchell), the fashion house's business manager?  It's up to Inspector Silvester (Thomas Reiner) to untangle this mystery.

Blood and Black Lace isn't the first giallo film, but I'm starting this blog with it because it is absolutely a must-see for those who are interested in the world of giallo. This movie is by far the most iconic and influential film of the genre, setting up the format of a series of beautiful women getting murdered in stylish ways, as well as introducing the "look" of the classic giallo killer: a faceless man in a black hat, coat, pants, and gloves. I highly recommend viewing the DVD of Blood and Black Lace because it includes the best, most illuminating commentary track I've ever heard, by Bava scholar Tim Lucas of Video Watchdog. Here are a few highlights:
What the Hell am I Watching?

This is a classy production, but it really pushes the envelope when it comes to the murder scenes, by 1964 standards.  For example, poor Peggy is choked, beat up, dragged up a flight of stairs, and burned alive on a hot stove. Then her body is loaded into the trunk of a car, driven to the country, hauled up more stairs, and hidden behind a screen before the police discover it. Mary Arden spent more time playing a corpse in this movie than she did playing a live person.

Nicole's (Ariana Gorini) murder really raises the bar on artistry, though. Bava expertly and stylishly cranks up the suspense as Nicole makes her way through a dark antique shop, lit only by flashing neon lights. It is both beautiful and frightening. And that's what giallo is all about.

This is a movie set in the world of fashion, so clothes and accessories figure in pretty strongly to the story. First, have a look at Fashion Director Christina Como (Eva Bartok). She only wears black since the death of her husband, but this evening look is stunning. 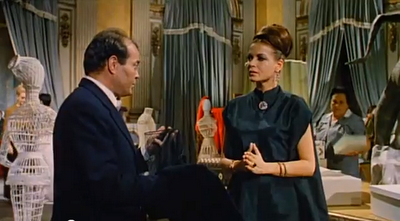 Only Nicole is  brave enough to wear the "cursed" black dress that Isabella was supposed to model. 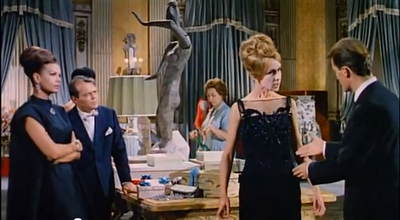 In that same scene, all eyes are on Nicole's purse, which holds Isabella's diary. 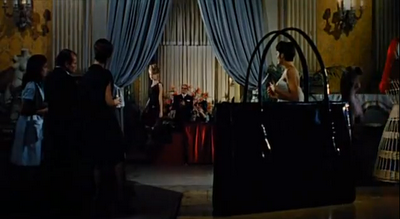 And, of course, we must mention the movie's most memorable accessory: the iconic spiked metal glove. 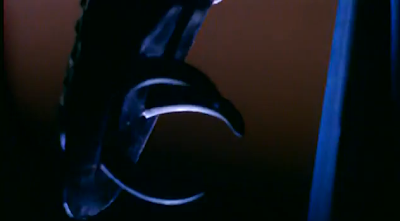