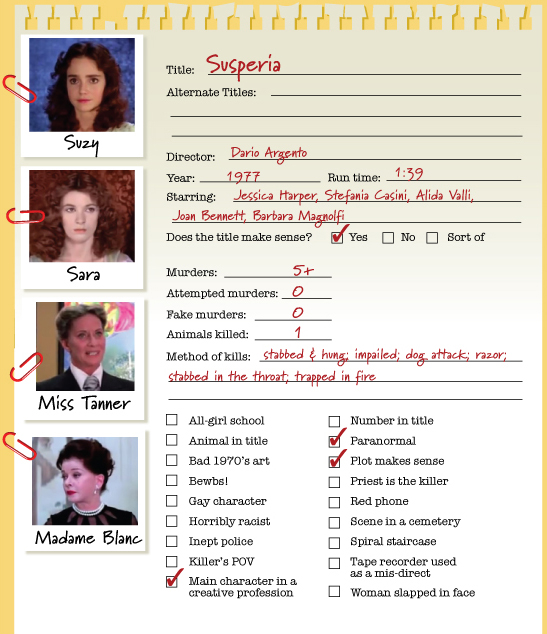 Suzy Bannion (Jessica Harper) is an American dancer who has only just arrived at a prestigious European ballet academy when she notices a series strange occurrences: a recently expelled student is murdered; strange noises can be heard at night; the staff behaves in an odd manner; maggots rain down from the ceiling. Suzy's roommate, Sara (Stefania Casini) has been cataloging the clues for months and may have an explanation – but could her far-fetched, diabolical ideas about the school be correct? Or are the deaths just the accidents they appear to be?

Thanks to its popularity among mainstream horror fans, Suspiria is the most famous giallo ever made, even though it is the least-characteristic film of the entire genre. It is unquestionably Dario Argento's masterpiece and a staggering artistic achievement. It has style to burn, is quintessentially Italian, and centers around a murder mystery, but it stands apart from the rest of the genre, due to its extreme visuals and a story that hinges on the supernatural, rather than a human killer.  In fact, Suspiria has more in common with supernatural horror movies like Rosmary's Baby than it does with giallo.  Emboldened by Suspiria's success, Argento would go on to make a sequel, Inferno, which turned out to be an incoherent, candy-colored mess and can't be categorized as a giallo.  Decades later, he would complete the trilogy with Mother Of Tears, which is a flat-out horror film.

The opening sequence is the most famous and it unfolds like a deadly Rube Goldberg device. Expelled student Pat (Eva Axen) runs away from school, gets attacked by a floating spirit, gets stabbed in the gut, crashes through a skylight, and gets hanged by an electrical cable.

My favorite scene is Sara's murder sequence. It starts in green in her room, shifts to red as she follows a strange sound down the hall, turns blue as she ventures into the attic and is attacked, and ends in violet when she falls into a pit of razor wire.

Did I mention maggots raining from the ceiling? Because that's a thing that happens in this movie.

Just everything. You'll find yourself slack-jawed at the grotesque beauty of the entire film. Have a look: 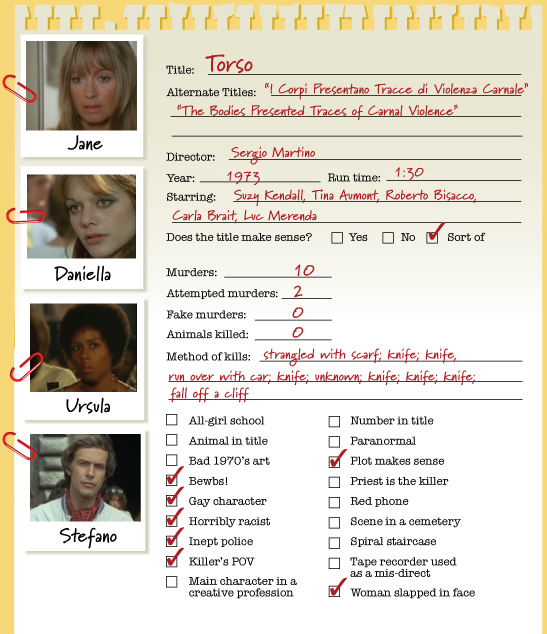 "A word of advice – If you want to be spared, don't try to recall
who you've seen wearing that foulard."

A masked killer is on the loose in Perugia, Italy, preying on students from the local college. The victims are all strangled with a distinctive red and black scarf before being knifed. To escape the danger, four of the students – Jane (Suzy Kendall), Daniella (Tina Aumont), Ursula (Carla Brait), and Katia (Angela Covello) – move into a large, remote villa on on a cliff overlooking the city, where they can be safe and frequently naked. But the killer has his sights on the foursome and he isn't far behind! Could the killer be Daniella's stalker, Stefano (Robert Bisacco)? Maybe it's the local doctor (Luc Mereda), the creepy scarf vendor (Ernesto Colli), or perhaps one of the horny townies is taking his fantasies too far. The remote villa quickly turns from an escape into a trap as the killer claims more and more victims!

If Mario Bava's Bay Of Blood is considered the template for the slasher film, then Sergio Martino's Torso takes the next step in the development. Expanding on the basic idea of naked co-eds in a confined space getting picked off in graphic fashion, Torso introduces more elements that would become stylistic staples of slasher films. These include the "killer's POV into a window, watching his victim," the "dim-witted but well-meaning yokel who interrupts the killer," the "couple steaming up a car and getting interrupted by the murderer," and "hiding in a closet as the killer silently walks just outside." There's also the convention of a sex scene immediately preceding a murder. Made in 1973, Torso predates the slasher genre and it might be disappointing for slasher fans. But it's a really good giallo, filled with extended, quiet scenes of high suspense. In fact, I think it's Sergio Martino's best movie.

Wearing a body-bearing mini-dress, Ursula draws a crowd of drooling men who make harassing and often racist comments about her.

There's a hippie party in an abandoned building that features naked dancing and bored-looking kids getting high. The camerawork gets a little creative here, shooting a topless dancer from below. This has the opposite of its desired effect.

The killer wears a stocking ski mask, making him look a bit like a Luchador.

The red and black scarf (or is it a black and red scarf?) is an important clue in the mystery 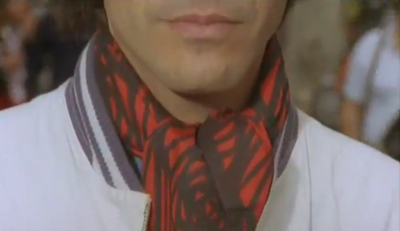 At the villa, the ladies kick it in fabulous scarf halters and peasant blouses. 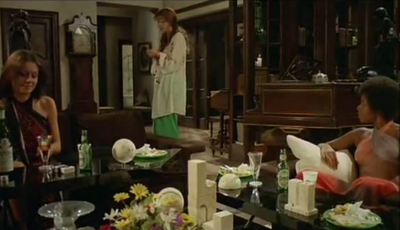 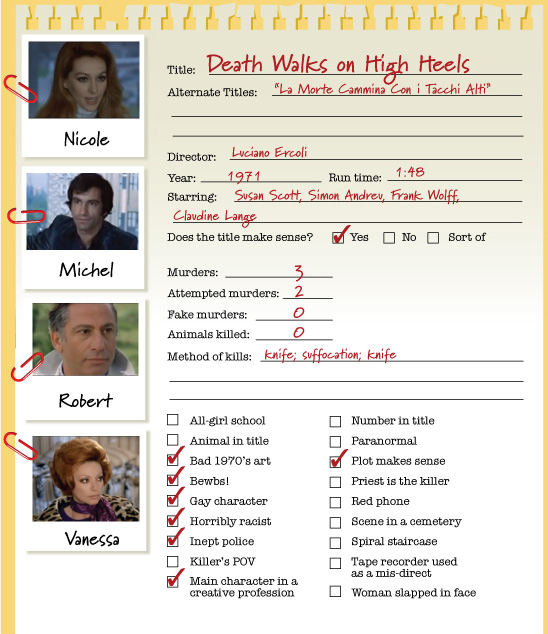 "And one day it dawned on me that every one of my questions meant listening to an answer
and every answer led to a disappointment."

Nicole Rochard (Nieves Navarro, credited as Susan Scott) is a successful nightclub dancer in Paris but her life isn't all glamor. For one thing, her boyfriend Michel (Simón Andreu) is jealous and frequently drunk. For another, her father (a notorious jewel thief) was recently murdered. And to top it off, she's been harassed and attacked by a masked stranger with piercing blue eyes who demands to know where her father hid millions in diamonds. When Nicole finds blue colored contact lenses in Michel's medicine cabinet, she seizes the opportunity to skip town with a married middle-aged doctor (Frank Wolff) to set up a love nest in the English countryside.  Unfortunately, she gets caught up in her new lover's drama, complicated by the sudden appearance of Michel. Who will live to the end? Who is the mastermind behind these dangerous games? And what does any of this have to do with the diamond heist?

Not a bad giallo, though it's light on blood and scares, focusing mainly on the byzantine plot. The film relies heavily on flashbacks, as it unfolds from different points of view. This can be intriguing but also confusing. Especially since Nicole and Robert's wife Vanessa (Claudie Lange) look very similar – both are petite redheads with high cheekbones and their makeup and clothes are similar. You might be tempted to think that there's a Vertigo-esque double-role plot twist or an identity-switch scam afoot but they are, in fact, just two similar-looking actresses playing two different roles.

Then there's the extended eyeball surgery sequence. We watch in extreme close-up as a knife cuts into an eyeball, removing a cataract.

What about that last shot, where the two detectives talk about how the high-heeled killer could easily have been a man and then share a knowing, pursed-lipped glance? Are we meant to assume that they're actually a gay couple?

But most astonishing of all is the blackface dance routine. For her first nightclub act, Nicole dances in a beaded g-string bikini a boa, and a short, dark wig, and at first it just looks like the lighting is weird. She's against a white background, which maybe possibly could make her skin look a little darker.  But then, Michel visits her backstage looking for some naughty time. He offers to help her remove her body makeup and he actually says "I like you when you're all blacked up."  YIKES!

Fashion Moment
There's a montage where Nicole is trying on clothes and for a brief second we see her in a mod orange and black mini-dress and the titular thigh-high boots. Or there are her cabaret costumes: the aforementioned beaded bikini and, later a metallic gold wig like the one that shows up in Death Stalks at Midnight. That's pretty cool, but my favorite is Vanessa's all-purple outfit with a leopard-pattern coat. 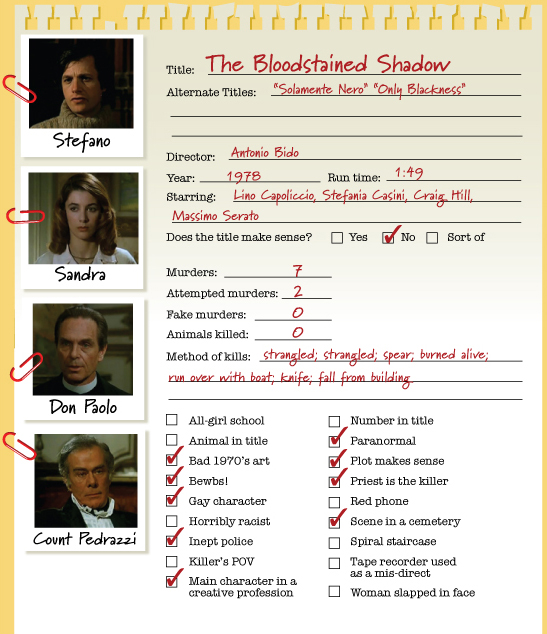 "I always thought spiritualism was a form of civic neurosis."

Stefano D'Archangelo (Lino Capoliccio, looking like an Italian James McAvoy) is a college professor, returning home to Murano after suffering a nervous breakdown. He is staying with his brother, Don Paolo (Craig Hill), the local priest, but his visit isn't the restful getaway he thought it would be. On Stefano's first night back in town, Don Paolo witnesses the murder of the local psychic in the courtyard and, though he couldn't make out the killer's face in the darkness and rain, He starts receiving threatening notes. Soon, the killer strikes again, rifling through old books and papers at the site of each murder, and stealing a painting from one victim's house. What is the murderer trying to cover up with these mysterious and specific thefts? Could the killer be the repugnant pedophile, Count Pedrazzi (Massimo Serato)? Or maybe it's the shady local doctor? With the help of his new girlfriend, Sandra (Stefania Casini), Stefano must follow the clues before the killer follows through on his threats.

The Bloodstained Shadow (not to be confused with The Bloodstained Butterfly or Seven Blood Stained Orchids) turns out to be a really good giallo with a story that actually makes sense, some inventive murder scenes, quite a bit of action, and an engaging, twisty plot that will keep you guessing. The wintertime setting in Murano, an island near Venice, provides some great atmosphere.

So Don Paolo witnesses the murder in the courtyard, but instead of going outside to help the poor victim, he runs through the house calling for his brother and the Sacristan. When he finally finds them, they stand around and talk it over before they actually go outside to look for a body. Big surprise: they don't find one! With all that procrastinating, the killer probably had enough time to go out for a bite to eat, come back, and then move the body.

Maybe a murder scene with an exposed corpse isn't the best hangout for a guy who gets panic attacks.

Check out Sandra's belly chain in the grownup scene. Kind of an interesting choice.

The police in this movie are entirely useless. In one scene, they check on Sandra when they see a figure running from her house. The whole while they have their guns drawn, waving them around and pointing them at the frightened woman.

There's a great scene where Sandra  is walking home and feels she's being followed. The tension ratchets up slowly and builds to a shock when an accordion player jumps out, providing his own scary soundtrack. 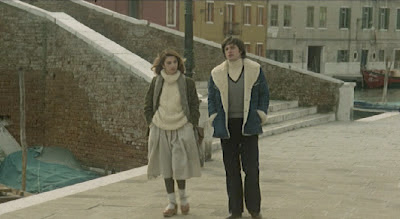 Stefano's look is "Wolowitz on Brokeback Mountain," with a white turtleneck paired with a deep-V sweater and a flashy wool-lined denim parka.  Sandra has opted for a bulky fisherman's sweater (who does she think she is? Luigi Pistilli?) under an avocado-green jacket. This is paired with the daring combination of dark tights, white socks, and clogs.
Email ThisBlogThis!Share to TwitterShare to FacebookShare to Pinterest
Labels: Antonio Bido, giallo, Italy, Lino Capoliccio, Movie, Solamente Nero, Stefania Casini, The Bloodstained Shadow
Newer Posts Older Posts Home
Subscribe to: Posts (Atom)