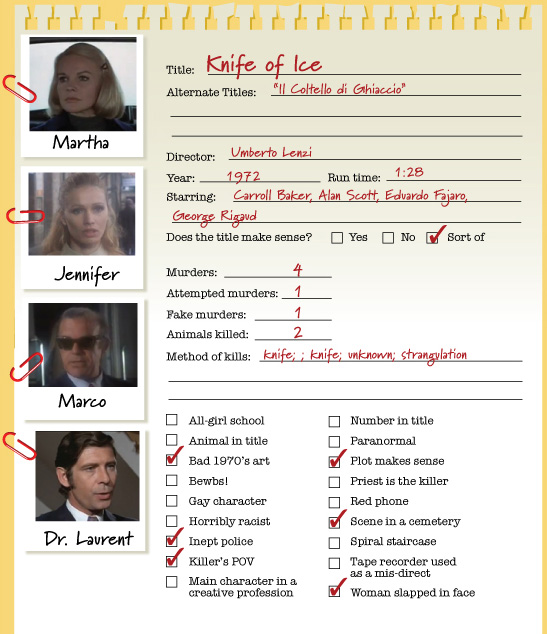 Zombies, voodoo, demons, and Afro-Cuban witches.
There's enough here to rob you of a month's sleep!"

Martha Caldwell (Carroll Baker), mute and skittish since she witnessed her parents killed in a train crash as a child, is being stalked by a mysterious killer who leaves behind satanic clues. As the people around her die, Martha wonders if the killer could be the creepy driver, Marco (Eduardo Fijaro), Dr. Laurent, her doctor (Alan Scott), or even her frail Uncle Ralph (George Rigaud), whose interest in the occult may be more than academic.  Or maybe it's the crazy-eyed morphine-addicted Satanist hippie who keeps popping up everywhere she goes.

No nudity or extreme gore in this film – it's a classy production that relies on suspense and focuses on the drawing room-style mystery at hand. There's not even a love story here, but the reason for that is apparent by the end of the film. Except for a few odd moments and the Satanist angle, this is a very buttoned-up production. The twist ending is a doozy, though, and it's one you probably won't see coming, even though it makes good sense once you look back on the film.

Fashion Moment: Did I mention that the crazy-eyed hippie wears a velvet cape? And that at the second funeral scene, Martha wears a tight black mini-skirt? It gets its own close-up:

What Have You Done to Solange? 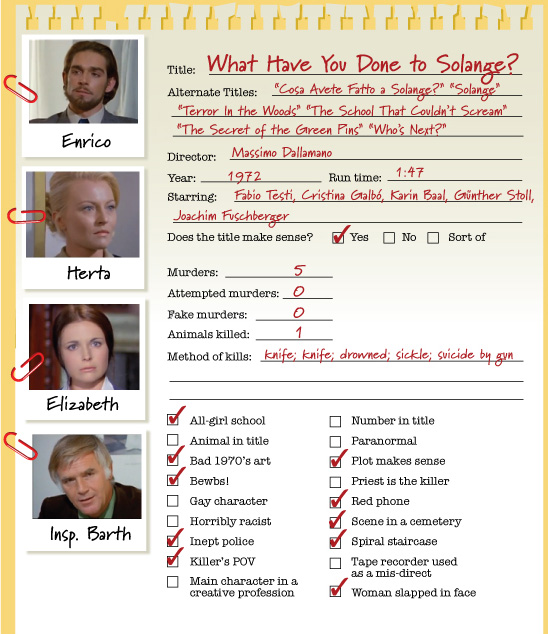 What Have You Done To Solange?

Enrico Rosseni (Fabio Testi) is a handsome, popular teacher at London's St. Mary's Catholic School for Girls. His wife Herta (Karin Baal) is also a teacher there, but their marriage is strained and Enrico has been having a secret affair with a student, Elizabeth (Cristina Galbó, credited as Christina Galbo). During one of their secret rendezvous, Elizabeth witnesses the murder of a classmate – but she and Enrico can't come forward without revealing their affair. With his tarnished reputation and no solid alibi, Enrico is a suspect in the case, but things turn quickly as more schoolgirls are murdered in the same brutal manner. Now Enrico must investigate on his own to discover what dark secrets link the victims. Who would want these girls dead and why? Are they as innocent as they appear? Could one of the school's priests be the killer? And how does a mysterious girl named Solange fit into the puzzle?

Besides having a fantastic title, What Have You Done To Solange? is an engaging, twisty, and complex thriller, ending in a place you'd never suspect. It also features something rare and wonderful in depicting the complex, grown-up relationship between husband and wife Enrico and Herta. They start the movie as ice-cold enemies, even taking separate cars to the same job, but the mystery unexpectedly brings them closer and, by working together to solve the case, they re-discover their love for each other. Watching a relationship re-kindle over the course of a movie is the stuff of serious art films and here it is in a giallo alongside Porky's-style scenes of a peeping Tom in a girls' shower and teenagers getting stabbed in their lady parts.

Not to give too much away, but there's a gruesome and upsetting flashback scene that takes place in a kitchen.

This movie's most jaw-dropping move is making an adulterous pedophile its hero and somehow redeeming him in the end. In that sense, he's sort of like Norman Bates in Psycho – the deranged sicko for whom we're compelled to root.

Herta starts the movie stern and cold, angry at her estranged husband. Her hair is a tight blonde helmet and she wears crisp, masculine suits.

But as she starts to re-discover her relationship with her husband, her look softens a little.

She lets her hair down, has more femenine makeup...

...and we start to see more delicate fabrics and comfortable-looking, casual clothing.

Strip Nude For Your Killer 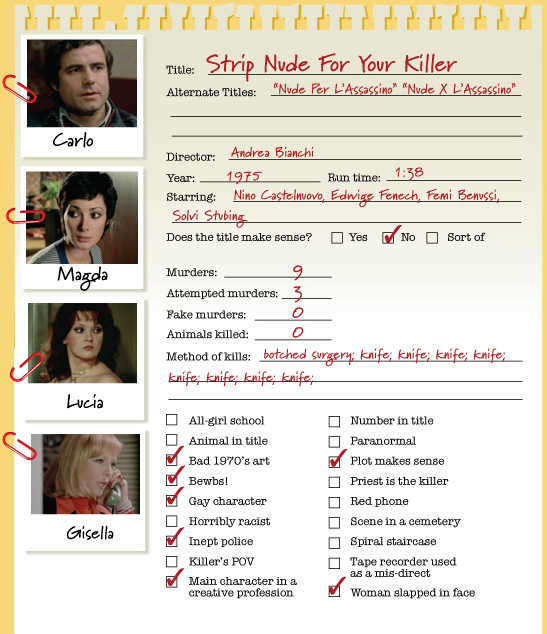 Strip Nude For Your Killer

"In our kind of business a person doesn't take long to know who he does and doesn't like."

A mysterious murderer in a black helmet and leather motorcycle gear is killing the employees of a photography studio. Photographer Carlo Bianchi (Nino Castelnuovo) and his girlfriend and assistant, Magda Cortis (Edwige Fenech), are piecing together the clues. Could the killer be the studio's stern owner, Gisella Montagni (Amanda)? Or jealous model Patrizia (Solvi Stubing)? And what motive could possibly tie all the killings together? Carlo and Magda must race to find the vital clues and solve the case!

Some gialli are scary and some gialli are sexy. Strip Nude For Your Killer is definitely a sexy giallo, with pretty much the entire cast in minimal wardrobe (or nothing at all) throughout the film. And if you like something shocking to go with your bewbs, consider that the movie opens with a woman in stirrups dying from complications of a botched abortion. That really sets the tone for some brutal killings, unapologetic misogyny, and gratuitous sex. In short, it's everything you want in a giallo film.

After the credits, we're taken to some sort of... facility. I'm not sure if it's a rec center, a spa, or a sex club, but there's a bar and nearly-naked people are everywhere. Carlo tails the beautiful Lucia (Femi Benussi), lures her into the sauna, gets her naked, and then jumps her. What makes it most uncomfortable is that she protests the whole time before going along with every step. Rather disturbing in our modern era of "no means no."

Chubby Maurizio is the saddest character in the entire giallo canon. The poor guy is married to a cold, domineering woman who gets more chicks than he does and when he does try to have an affair, he bursts into tears, clumsily offers to pay the woman anyway, and finds solace with his blow-up doll. It's supposed to be funny, but I just find it depressing. It makes me even sadder when the poor guy is killed later.

Hey, Magda, honey? You're working with caustic chemicals in that film lab. Maybe take off the bulky fur coat?

And speaking of which, she must have done millions of Lira in damage, knocking down lights and furniture while trying to stealthily evade the killer in the photo studio.

It takes a confident man to wear a swimsuit like this. 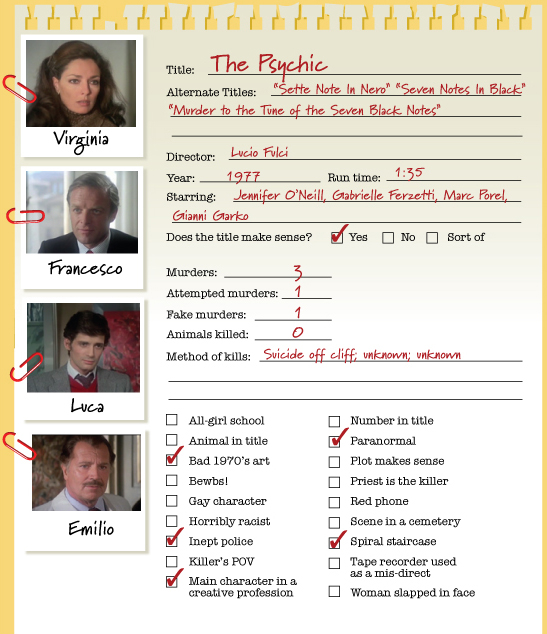 "This thing's becoming an obsession, darling. Get it out of your mind."

While driving alone to her new husband's Tuscan estate, Virginia Ducci (Jennifer O'Neill) experiences a series of psychic visions. A streak of red light... a yellow taxi...  a broken mirror... a dead old woman whose face is streaked in blood... a mysterious hole in a bedroom wall. When she finally arrives at the villa, she starts to recognize objects from her visions, but everything is slightly different than she remembers. Seeing that the spot in the bedroom wall from her vision is intact, she takes a pick axe to it and discovers a body entombed behind the bricks – the body of her husband's previous lover. Virginia struggles to remember the details of her vision, to find out how the woman died, and to clear her husband's name. But were her visions echoes of past events... or predictions of things to come?

Lucio Fulci really came up with a brilliant conceit for this film: he dumps all the puzzle pieces on the table right at the beginning of the film and then proceeds to put them together – though they may not form the picture you thought they would.  The Psychic (often known by its more apt and poetic Italian title, Sette Note In Nero) is an underrated Fulci gem, often overshadowed by his more sensationalist films, The Beyond and Don't Torture a Duckling.  The film is slow-paced and devoid of any sexuality, but Fulci is more focused on atmosphere, storytelling, and a few mild moments of bloodshed.

Take a drink every time there's a camera zoom. Two if it's into someone's eyes

The opening scene is the most gruesome in the movie, showing Virginia's mother throwing herself off a cliff, with the rock cutting up her face as she falls.  This opening scene of The Psychic uses the same effect as the final scene of Fulci's Don't Torture a Duckling.

At the time this movie was made there was a big 1920's fashion trend, with pinstripes, fedora hats, and fitted womens' suits.  You work that gangster look, Charlie Girl. 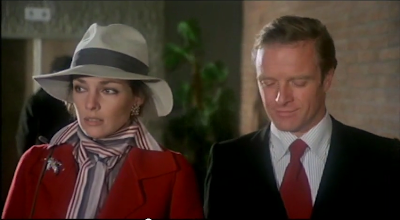 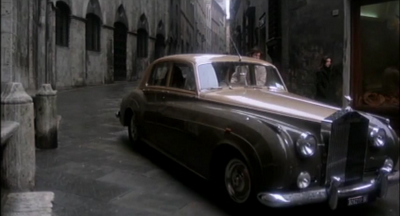