The Secret of Seagull Island 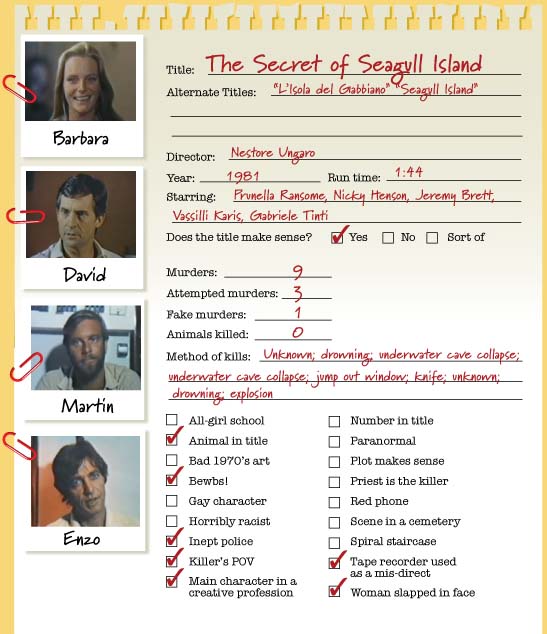 The Secret of Seagull Island

"Unfortunately, modern technology doesn't work very well in these parts.
It's the price you pay for solitude."

Barbara Carey (Prunella Ransome) arrives in Rome to visit her sister, blind pianist Marianne Saunders (Sherry Buchanan) only to discover that she has mysteriously vanished. To make matters worse, this is the third instance in recent months of a blind girl's abduction. With the help of British Consulate Martin Foster (Nicky Henson), Barbara searches for her sister – a search that leads her to the private island of millionaire David Malcom (Jeremy Brett). Is Marianne still alive? Why are blind women being targeted? And what terrible secrets does David keep on his remote island?

The Secret of Seagull Island originally aired on TV as a five-part mini-series and was later edited down to feature length for a video release. It has pretty much the exact same plot as the 1971 movie Amuck! (starring Farley Granger and Barbara Bouchet) but with a lot more panache and more melodramatic twists and turns, as was required by the cliffhanger format of a serialized drama. There's a good mystery here, but the resolution is eye rolling-ly, facepalming-ly awful. How did he...? And shouldn't they have...? And what's with the...? It's best not to give it too much thought.
What the Hell Am I Watching?

The police are absolutely no help in Barbara's investigation. All the Inspector (Fabrizio Jovine) does, in fact is order someone to bring him a file and then eat a late-night soft-boiled egg. Because this particular police precinct has table service. Attended by white-aproned waiters.

We're talking TV movie budgets here, so fabulous costumes weren't a high priority. But at least the costumer knew that blonde-haired Prunella Ransome looks fantastic in bright blues and it sort of becomes her signature color. 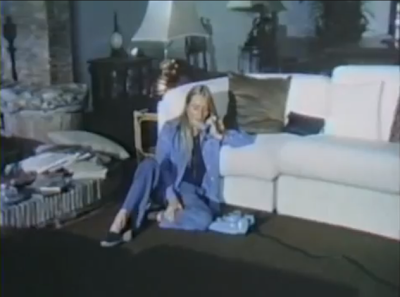 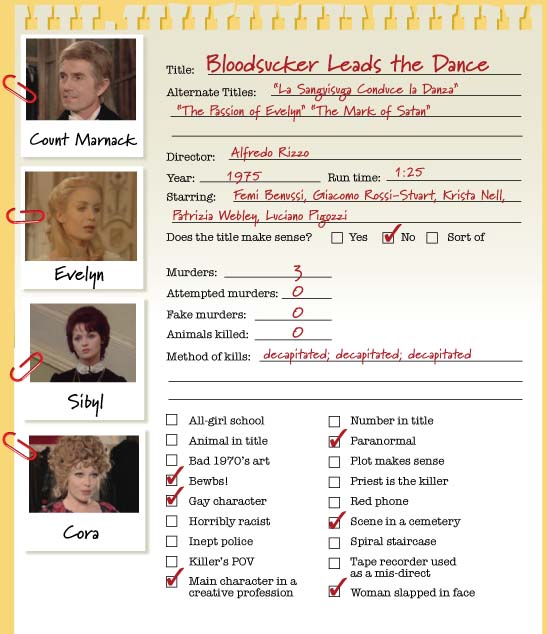 "The world is a stage. But sometimes it isn't."

It's 1902 in the city of Dublin and just as a troupe of actresses finish the closing night of their show, handsome Count Richard Marnack (Giacomo Rossi-Stuart) arrives. He is infatuated with actress Evelyn (Patrizia Webley) and invites her and her colleagues – actresses Cora (Krista Nell), Rosalind (Mariza Damon), and Penny (Lidia Olizzi) and stagehand Samuel (Leo Valeriano) – to join him at his  castle. While Evelyn and the Count take romantic walks by the seaside and Evelyn and Penny entertain themselves in their bedroom, lusty Cora nets herself a local fisherman. But things turn sinister when the Count admits his family's dark past – both his father and his grandfather murdered their wives with the same ceremonial dagger and the Count's own wife went missing several years ago and is presumed dead. Before long, the visitors start turning up dead, decapitated with the same cursed blade. Could the killer be Sybil (Femi Benussi), the jealous maid or Gregory (Luciano Pigozzi), the creepy gardener? Is it possible that a ghost of the Count's ancestor has returned to fulfill the family curse?

The title Bloodsucker Leads the Dance is, perhaps, the most misleading non-sequiter in a genre filled with nonsensical titles. There are no vampires, as the title suggests, no one dances (even metaphorically), and there is certainly no one who leads any dancing. I suppose that's why the movie is sometimes known as The Passion of Evelyn, which is a little more apt. It seems that all the money for this film went into the period costumes and locations - and certainly not the script with its laughably awful dialogue (see above). It did have lofty aspirations, though, borrowing elements from such esteemed literary sources as Rebecca, Jane Eyre, and The Man in the Iron Mask.

The movie is strange enough, but the versions you'll see on DVD and Netflix have a wonderfully crazy special bonus: an eight-minute intro by horror host Redemption. Imagine a lesbian vampire Isabella Rossellini look-alike with a geographically untraceable accent wearing black-wings, leather, and white contacts. Now imagine her making out with mostly-naked chicks dripping with fake blood in slow motion. Then, in her sexy, slow purr, she talks a little about the history and development of the horror genre. It's exactly as awesome as it sounds.

Bloodsucker Leads the Dance drinking game! Drink whenever someone insults Samuel's masculinity. Chug whenever the camera lingers on a horse's butt.

Here's the scene where Evelyn first arrives in her room at the castle. 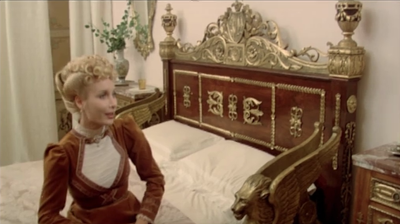 Notice that her amber dress and blond curls are in perfect harmony with the room's maple furnishings and gold filigree. Even the creamy sheets match her blouse. It's as if this is just where she belongs. For ever and ever.

Death Steps in the Dark 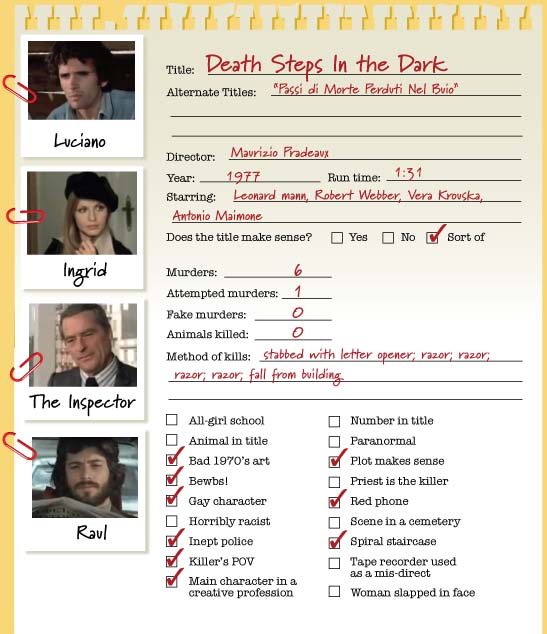 Death Steps in the Dark

"It's easy to see you're new at this business. You're useless!"

Italian photographer Luciano Morelli (Leonard Mann) and his Swedish model girlfriend Ingrid Steimosson (Vera Krouska) are on the Istanbul-Athens express train when suddenly the lights go out and one of the passengers in their car is murdered. Luciano's letter opener was used as the murder weapon, making him the chief suspect. On the run from the Inspector (Robert Webber), Luciano must now prove his innocence. Meanwhile, Raul (Nikos Verlekis) and his girlfriend Ulla (Susy Jennings) saw the murderer flee the crime scene and picked up a glove that was dropped. They decide to blackmail the murderer but are they putting their own lives in jeopardy? Could the killer be the old priest (Antonio Maimone)? And can Luciano and Ingrid find the killer and clear his name?

Death Steps in the Dark (not to be confused with Death Walks in High Heels) is a fun little giallo with some creative murder scenes, a heist element, and comic elements to keep things light. Unfortunately, the identity of the killer and the motive are never foreshadowed, making it impossible to guess the identity before the final reveal.

Ingrid takes the stock character of the "vapid fashion model" to new and infuriating heights. I realize that she is intended to be comic relief, but she nearly gets her boyfriend killed or arrested several times and bungles things at every turn. It's a miracle that she made it through the movie un-slapped.

Ingrid's idea of a "fashion show" is swanning around for five minutes in a green evening gown. There are no other models or dresses involved.

There's a fantastically gruesome part where, through a series of events, Ulla turns on the water in her bath and blood pours out.

In what I'm sure is not his finest hour, Luciano hides from the Athens police by disguising himself in drag. 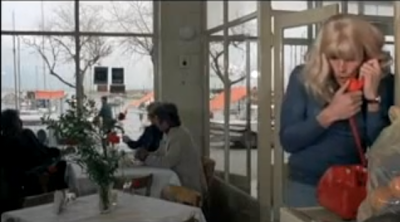 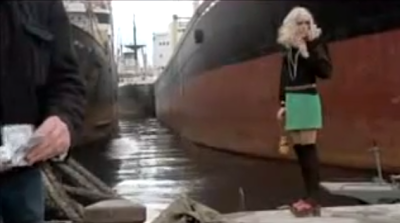 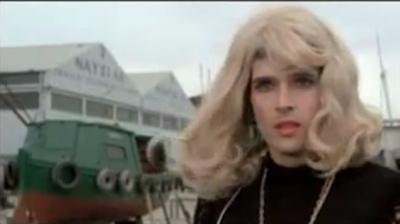 A Dragonfly for Each Corpse 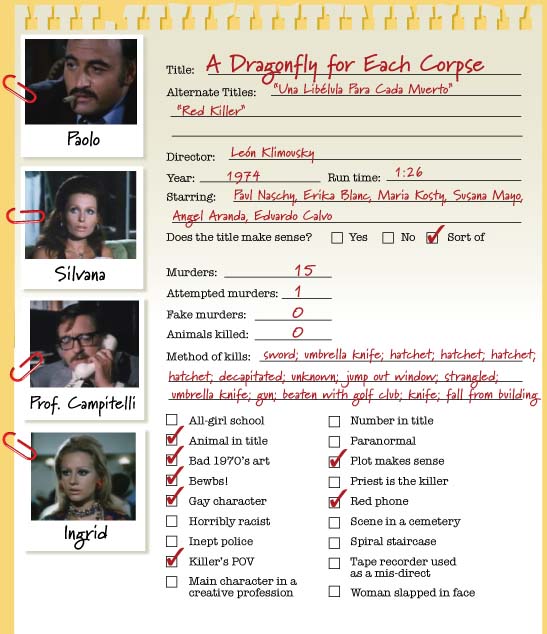 A Dragonfly for Each Corpse

"High fashion. Craftsmanship. Only a high-class garment would have this button."

A mysterious and fashionable vigilante in a hooded coat and red pants has been eliminating the prostitutes and junkies of Milan and leaving a small dragonfly sculpture - a symbol of vice - on each body as a trademark.  It's up to Inspector Paolo Scaporalla (Paul Naschy) to stop her, with the help of his girlfriend Silvana (Erika Blanc), whose connections to the fashion world provide valuable insights. The investigation will lead them to a prostitution ring, an amusement park, and an enigmatic drawing one of the victims left as a clue. Could the killer be Professor Campitelli (Eduardo Calvo), who hides a dark obsession, or Claudia Volpini (Susana Mayo), covering for her husband's infidelities. With pressure from the chief and the body count rising, Paolo and Silvana must race to find the killer.

A Dragonfly for Each Corpse is a really fantastic giallo with one of the highest body counts in the genre. It is, unfortunately, pretty obscure and could benefit with a remastering and a DVD release because it's a good addition to the genre. The twisty plot and large pool of suspects (most of whom are introduced in a party scene near the beginning of the movie) keeps suspicions shifting and the murderer's wide array of creative murder weapons keeps things interesting.
What the Hell am I Watching?

Paolo's investigation leads him to an ambush in an alley, where he takes on a group of thugs in Nazi uniforms. Because it's not a Paul Naschy movie without a three-on-one brawl.

Please to enjoy an appearance by the least-convincing drag queen ever. The hairy chest is a major giveaway.

If you're running from the cops, why would you go on a roller coaster? You know where it's going to end up and that they're all waiting for you at the station. The "roller coaster shootout" concept was done a few years later and 100 times better in Sergio Martino's The Suspicious Death of a Minor.

If you're laying there dying and you have time to sketch a picture of your killer's distinctive birthmark, maybe that time would be better spent just WRITING DOWN HIS NAME instead.

Later, Silvana is intently focused, poring over photographic evidence with a magnifying glass... while in bed, completely naked. What's that about? I mean besides being totally gratuitous.

Let's have a look at the killer's outfit: A black hooded pea coat, red straight-leg pants, and black platforms with a chunky heel. Tres chic. 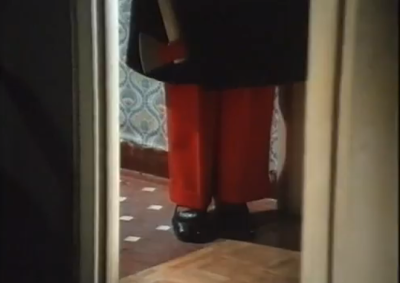 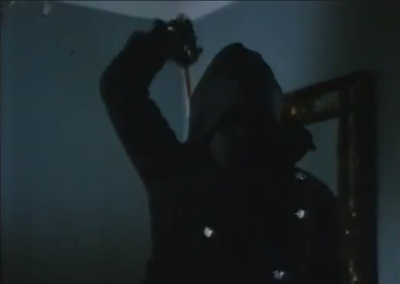 Also, have a look at architect Volpini in his swanky white tux and peach bow tie. 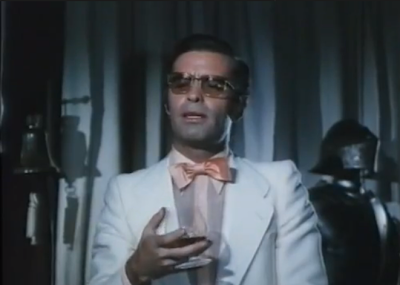 Let this be a lesson to the gents: if you wear a light-colored shirt always always ALWAYS wear a white undershirt underneath. Always.