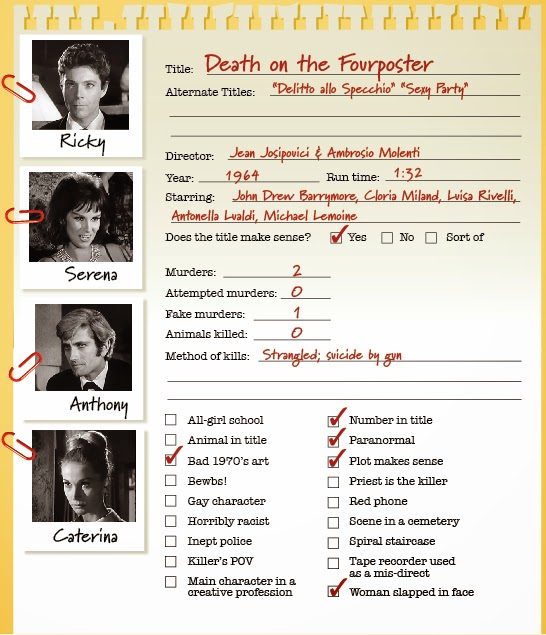 The things we take for granted can end at any moment, like life itself.

Ricky (Michael Lemorine) invites a group of his young friends for a rollicking weekend at his family's castle. But just as things get started, surprise guests show up - sexy Serena (Antonella Lualdi) and suave, blonde Anthony (John Drew Barrymore) dominate the party with groovy music, sultry dancing and a game called "a shattering of illusions," wherein Serena exposes the other guest's character flaws.  She then encourages Anthony to perform a psychic parlor trick and, while in a trance, he makes a strange series of predictions, ending with someone's death. Terrified, he flees the castle, but the party goes on and his predictions seem to come true one by one, concluding with one guest's death by strangulation on a grand four-poster bed. Could the killer be nerdy Georgie (Massimo Carocci), gambling addict Paul (Joe Atlanta) or hot-blooded Kitty (José Greci)? Maybe it was pervy groundskeeper Aldo (Giuseppe Fortis) or maid Caterina (Luisa Rivelli), who is having a secret affair with Ricky? The truth will come out by sunrise!

Death on a Fourposter is a decent early giallo, though it's bloodless and has a very low body count. While Mario Bava's more stylish film The Girl Who Knew Too Much is regarded as the first giallo, Death on a Fourposter was actually released two months earlier, perhaps priming audiences for youthful murder mysteries yet to come. I would not argue too strongly with anyone who would label this a "proto-giallo" or who wouldn't include it among the giallo classics, but it does fit all of my criteria.  The setting, like the film itself, is a fascinating mix of new and old - an ancient castle filled with modern furniture, art and music communicates to the audience that standard gothic horror conventions would be injected with a youthful jolt of energy.

From the beginning, we get the impression that this group of friends shares a cutting sense of humor, gently mocking each other with quips and verbal jabs. But during her parlor game, Serena takes it to a very real, very dark place by seducing Carlo (Mario Valdemarin) in front of his girlfriend just because she can and by getting Paul to gamble away his girlfriend, Kitty in a game of dice, just to prove a point. Structurally, it's a great way to establish that any of these people can turn on each other at any time.

Kitty thinks modesty is for other people - she's ready for action in this eye-catching jumper. 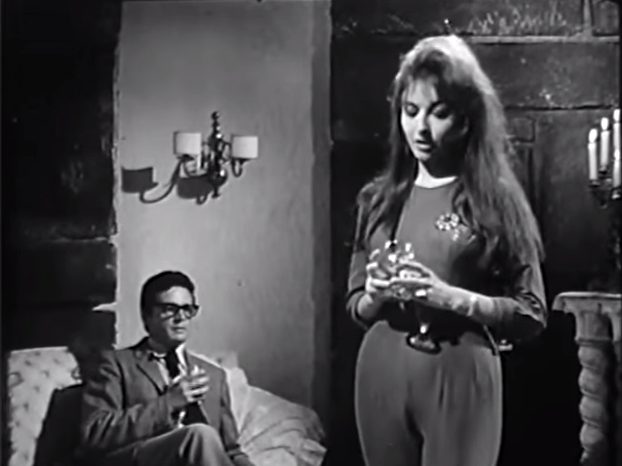 But no one turns heads like the sultry Serena, who makes her entrance in a sexy gown, dripping with fur and jewels. 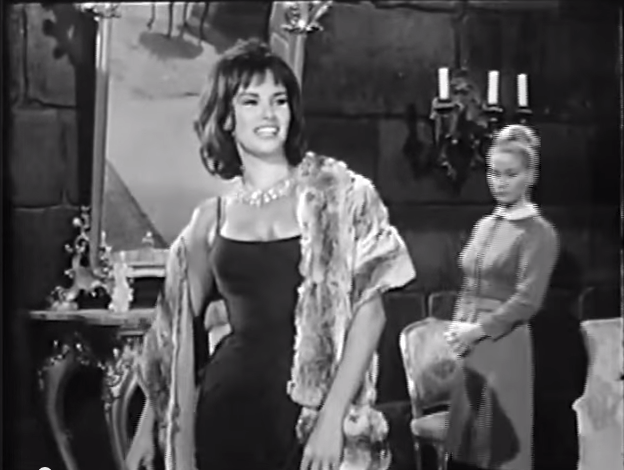 Catarina is in the background giving her the stink-eye, and for good reason.

Snapshot of a Crime 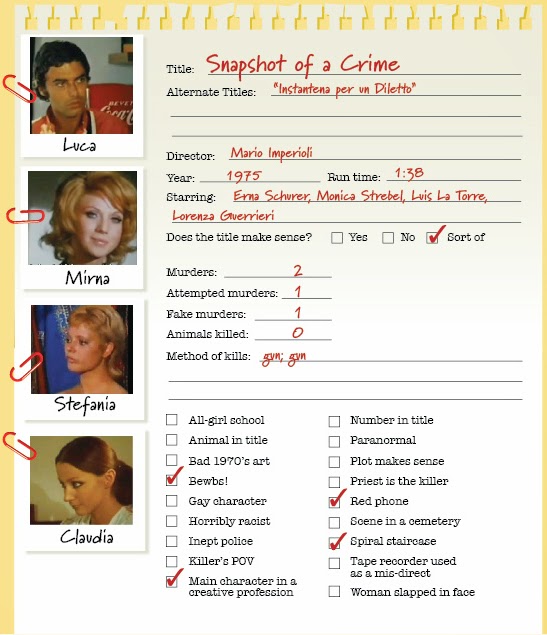 Snapshot of a Crime

It may seem banal, but this is giallo territory.

Without any explanation, steely-eyed Mirna (Erna Schurer) breaks off her relationship with boyfriend Luca (Luis La Torre), who decides to get away to the Puglia coast. There, he meets photographer Giancarlo (Giancarlo Annunziata) and his two fashion models, Stefania (Lorenza Guerrieri) and Claudia (Monica Strebel) Luca quickly rebounds with Stefania but when they steal away to a private island for a naughty private photo shoot, Stefania disappears along with the camera and, despite the fact that no body has turned up, Claudia accuses Luca of murdering her friend. Soon, Luca receives photos of himself in flagrante with Stefania which, out of context, look like he's murdering her. Did Luca really kill Stefania? If not, who is trying to make it look that way? And could Mirna somehow be involved?

Snapshot of a Crime is a deep-cut giallo best only sought out by genre completists (like myself).  The movie is edited together like the world's longest trailer, with a constant driving rock soundtrack and abrupt cuts that feel as if they're just sound bites taken from the middle of much longer scenes. We ping-pong between settings and characters with no establishing shots or sense of time - it's incredibly disorienting. The narrative feels aimless for much of the film, but things start to come together when we're shown yellow-tinted flashbacks that reveal the missing moments between the scenes. After a bloodless 70 minutes of meandering relationship melodrama, I was ready to give up, but then a mystery plot emerged and played out like an early Umberto Lenzi con-game giallo. Like I said, if you're new to giallo, watch the classics before trying to make sense of this one.

That self-referential quote above is an actual line of dialogue from this movie.

Besides those disorienting jump cuts, there are several fake-out scenes that will leave you scratching your head. We see a dark first-person camera shot of Claudia, sleeping in bed. She turns and addresses the camera. Normally, this would lead to a murder scene but instead, we abruptly jump to the next scene.  Later, after their sexy times on the beach, a shadow is seen approaching on the sand holding a spear gun (or is it a metal detector?). Again, this would normally lead to a murder scene but we jump elsewhere.

Then, after the encounter at the beach, there's no indication that Stefania is missing, let alone dead. Luca goes about his life and then gets blackmail notes, leaving the audience to piece the story together with the most meager clues. The filmmakers may have thought this approach was "impressionistic" or "arty" but it's just bad storytelling.

When he's not shirtless in swimwear, Luca likes to wear these groovy leisure suits. 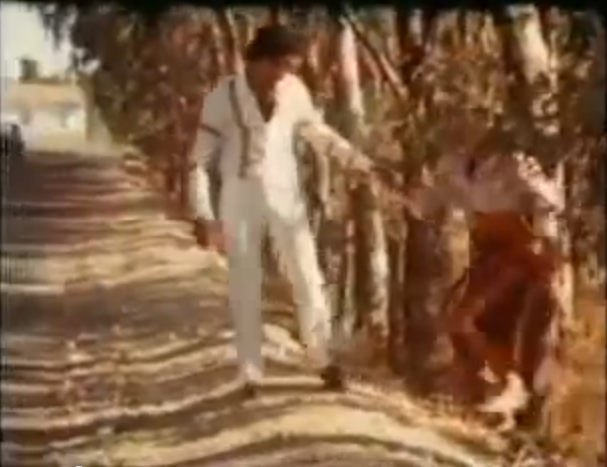 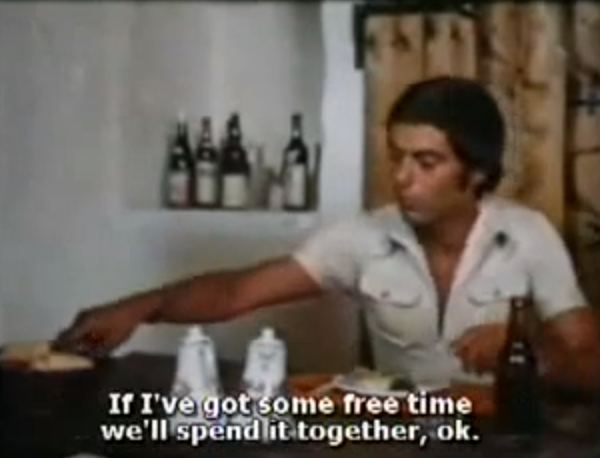 Also, check out one of the coolest spiral staircases I've seen in a giallo movie. 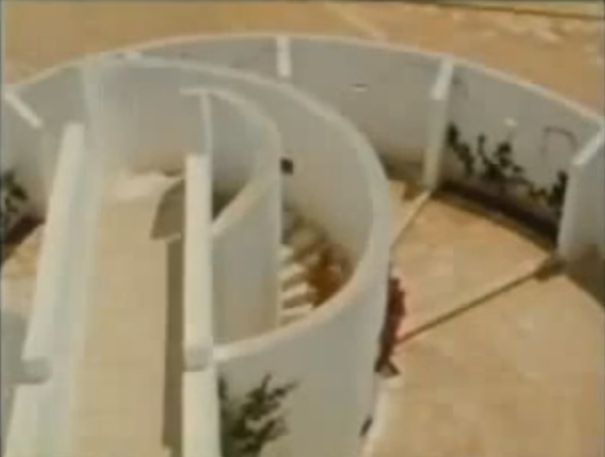 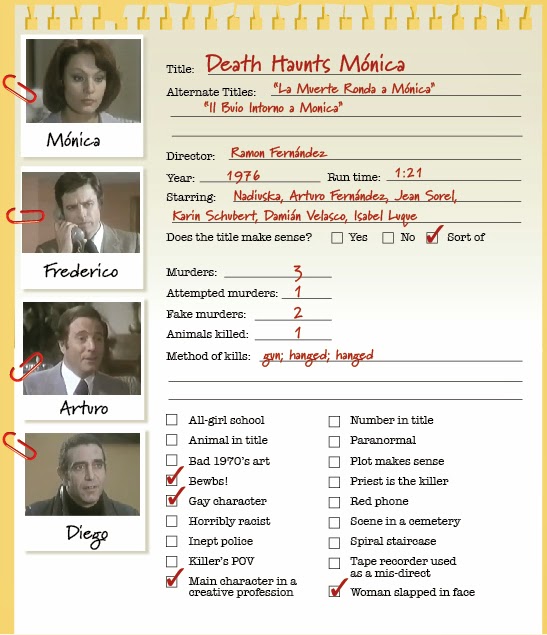 If only I could solve everything with pills.

Madrid businessman Frederico (Jean Sorel) leads a messy life. His real estate firm is sinking, his business partners are plotting against him, his wife Mónica (Nadiuska) just found out about his affair, and Diego (Damián Velasco) - an associate from Frederico's former life as a smuggler and kidnapper - is extorting him. One night while Frederico is away, a masked intruder breaks into Monica's home. But after she shoots him, the intruder springs up, knocks her out, and stages Diego's lifeless body in her home so when Mónica awakes, it looks like Diego was the attacker. When Frederico returns home, he and Mónica dispose of Diego's body but soon, tormenting phone calls begin and more people turn up dead. Who is trying to frame Mónica for murder and drive her mad? And who will be the next to die?

While Death Haunts Mónica meets all of my criteria to be called a giallo, it's really more of a fast-paced soap opera that's 65% exposition and 35% actual plot. The first hour of this 125-minute film plays out like a season of "Falcon Crest" with secret affairs, high-stakes business deals and double-crossings. Death doesn't haunt anyone until the pivotal scene where Mónica shoots the masked intruder. After that, it's all giallo, reminiscent of Lucio Fulci's con-game plots with notes of Diabolique and Gaslight. The movie features high energy and a fast pace throughout and ends with a twist ending on top of a twist ending, which makes up somewhat for its bloodless first two-thirds.

Early in the movie, Diego shows up to Frederico's office to extort money and menacingly admires a photo of Mónica on his desk. In the photo, Mónica is wearing the same outfit she was wearing that very morning while confronting Frederico's mistress at the photographer's studio. They clearly used a production still from an earlier day's shoot.

Adding to the blatantly gratuitous nudity (this may be the most well-bathed female cast in any giallo ever), Mónica's friend Elena (Yolanda Rios) goes to a nightclub that features a lesbian sex show for no reason at all.

Early in the movie, Mónica gears up for a confrontation with her husband's lover by squaring her shoulders, cocking her hat and glamming it up Joan Crawford style. 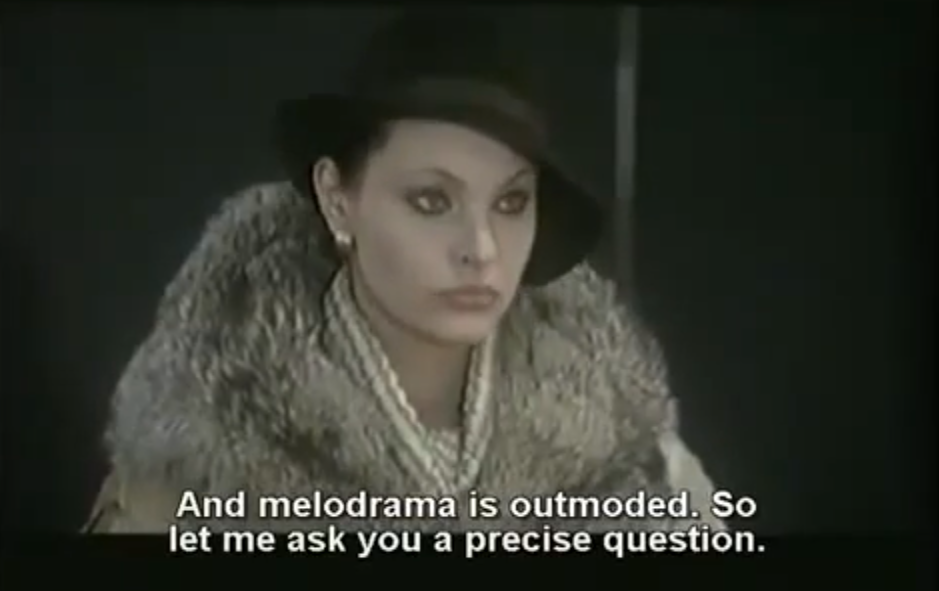 She has fire in her eyes and a polished, expensive look that means business. But later on, when her ends have been frayed and her nerves are shot, she looks more like this: 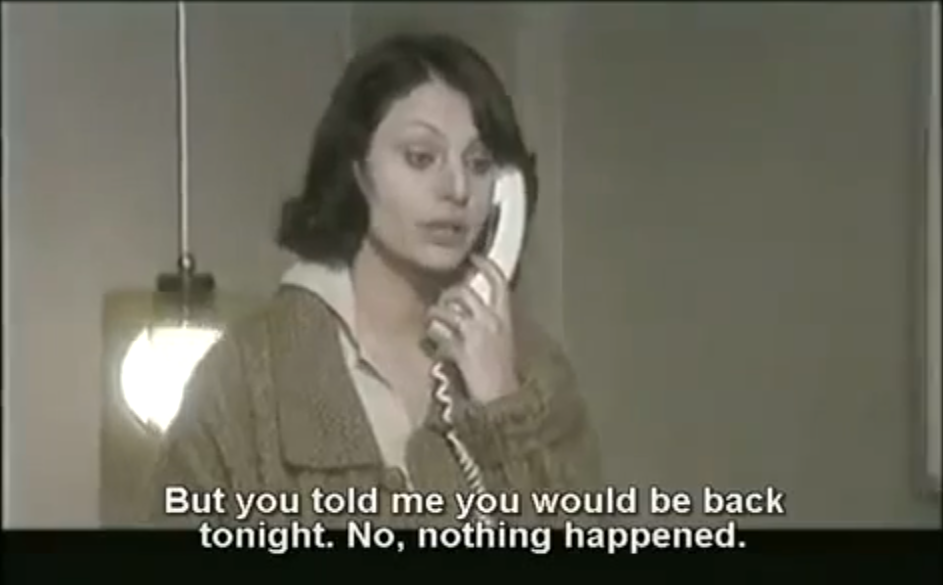 She's looking to an oversized, dowdy brown sweater for comfort and her rumpled, askew collar is the fashion equivalent of a resigned sigh. Pull it together, girl.