The Killer with a Thousand Eyes 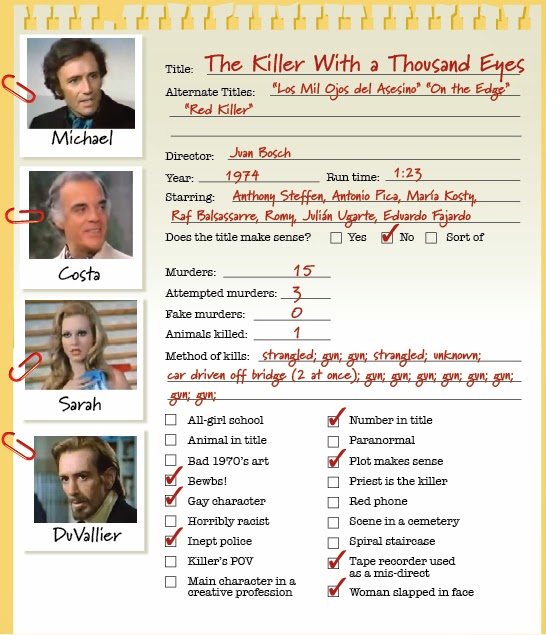 The Killer with a Thousand Eyes

"I've never dropped a case yet and I won't stop now."

When English Interpol agent Alistair McAndrew is murdered by a kabuki-masked assassin, his colleague, Michael Laurence (Anthony Steffen) is sent to Lisbon to identify and retrieve the body. But while in Portugal, Michael gets pulled into Alistair's case and, with help from an international team of agents, starts his own undercover investigation into the city's drug smuggling operations. As he gets closer to his friend's killer, informants and fellow agents are getting taken out by the mysterious gloved killer. Could it be the work of crime boss Costa (Eduardo Fajardo) or is someone else pulling the strings? Michael must hurry to find out before more people are murdered!

The Killer with a Thousand Eyes (not to be confused with The Man with Icy Eyes) is one of those fun gialli-poliziotteschi hybrids, combining the mysterious black-gloved killer and mystery aspects of a giallo with all the action and idiomatic themes of an Italian police procedural. And boy is this one action-packed. There's intrigue, explosions, six kung-fu fight scenes, a shootout in a dark warehouse and a couple of car chases - the last of which ends with the bad guys driving over the side of a giant suspension bridge. And it all winds up with a satisfying twist ending.

When French agent DuVallier (Raf Baldassarre) lets Michael crash at his apartment, he makes a point of showing off an exercise device he keeps in the kitchen. I thought for sure that this would pay off later on - maybe Michael could choke an intruder with it - but it never does.

Crime boss Costa's girlfriend, Sarah is a real psycho, as evidenced by her boisterous bloodlust during a cockfight at a dinner party.

Crime movie cliché #104: the detective and the crime boss square off over a quiet but intense game of chess. Because the chess game is a metaphor for their contentious relationship.

DuVallier's murder scene takes place in the woods and as the tension builds, the birds get louder and louder - but instead of sampling actual bird sounds, they used electronic chirps and whistles, building to a weird robotic cacophony.

When we first see Michael, he's getting his hands dirty, busting up a small-time London drug ring in this cool black jacket and turtleneck. 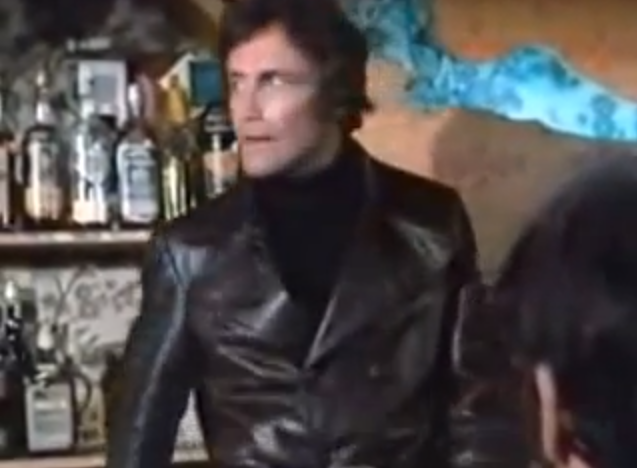 In Lisbon he gets decked out in his Carnaby Street finest. Love this chic jacket-waistcoat-ascott combo. 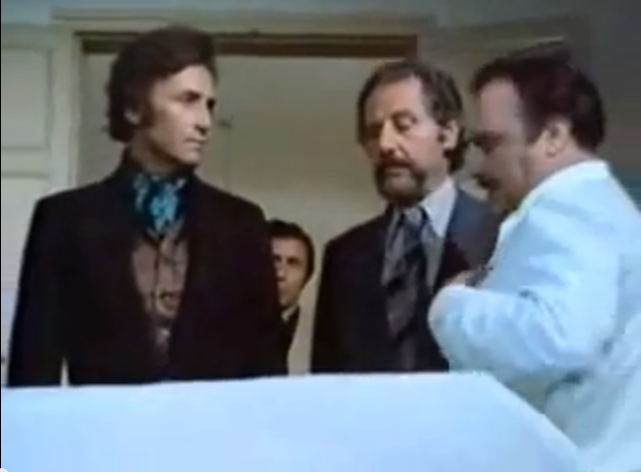 But for the rest of this investigation, he wears these less flashy outfits: sport coat, chinos, and a wide tie, all in solid colors. He does have a magnificent gold belt buckle, though. 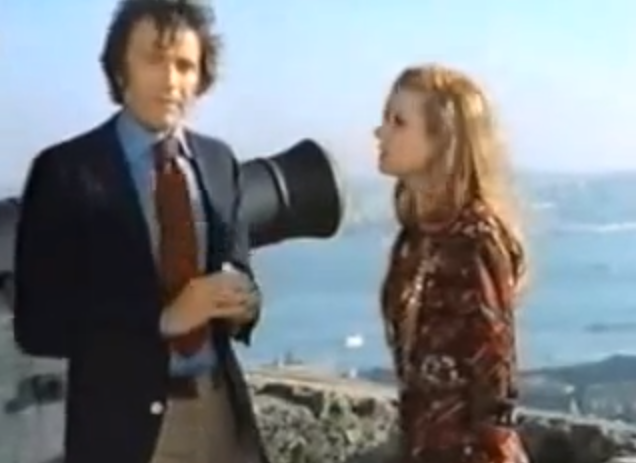 But the real fashion iconoclast of the movie turns out to be Michael's commanding officer, Albert (Antonio Pico) who climbs out of a pool in one scene wearing a tiny white banana hammock. 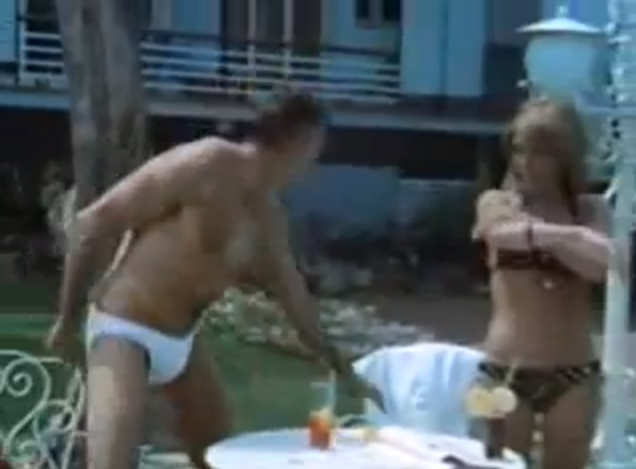 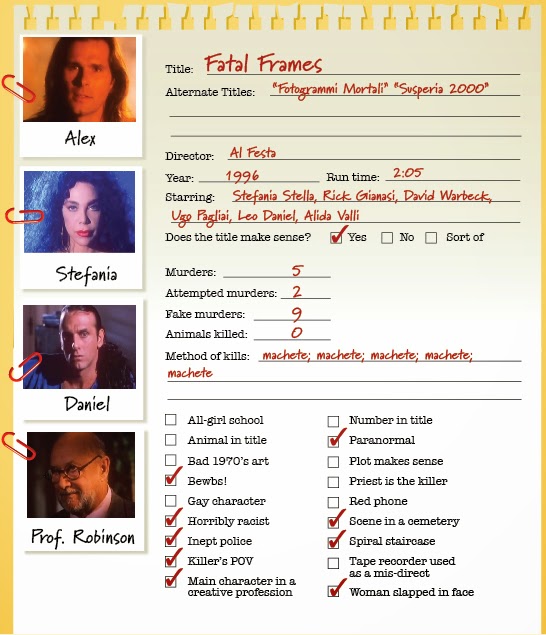 "Christ, that woman gave me the creeps. This is a weird situation."

American film director Alex Ritt (Rick Gianasi) is mourning the death of his girlfriend, who was the third of five victims of the "Video Killer" - a serial murderer who hacked his victims with a machete, videotaped the bodies and sent the tapes to the police. Eager for a change of scenery, Alex accepts a job from his friend Daniel (Leo Daniel) to make a music video in Rome for pop singer Stefania Stella (Stefania Stella).  But old memories resurface when the women around him are brutally murdered one by one as he helplessly watches and eerie videos of the crime scenes are delivered to the police. In his anxious state, Alex is hallucinating visions and voices of the victims... or is he seeing ghosts?  Did the killer follow Alex to Rome or is a copycat murdering these women? Can he and his friends get the answers they need at a seance? And can Alex convince American investigator Professor Robinson (Donald Pleasence) that he's not the killer?

Fatal Frames (which is sometimes audaciously called Susperia 2000) is a messy, poorly-rendered homage to Dario Argento. Story elements of The Bird With the Crystal Plumage and Deep Red are crammed together and shot in a weak imitation of Susperia's color-soaked cinematography. It takes more than a couple of lens filters and a handful of gels to get Argento's look right.  You can't fault director/composer Al Festa for his ambition and his choice of inspiration, but the final product is a poorly shot, badly written, terribly-acted muddy-sounding mess.

In his final scene of the movie (and his final scene ever on film), Donald Pleasence phones the police from the airport, telling them that he has to leave town because an old case has re-opened. He then walks into the distance to the theme from John Carpenter's Halloween. This is the best moment in the entire movie.

The seance scene is crazy. Alex, Daniel and Stefania go to an opulent palazo lit only by candles (for some reason) where a fancy formal party is taking place. The whole situation gives off a weird Eyes Wide Shut vibe. They meet a blind psychic Countess (Alida Valli) before winding through a maze of rooms to consult with the medium.

Let's talk about that cemetery scene. In a story thread that leads absolutely nowhere, Alex searches out the grave of a mysterious artist and meets a scowling priest (Angus Scrimm), who starts shouting and ranting... and then disappears without warning. That whole segment is bonkers.

Fatal Frames was released in 1996 but the look is pure 1988. Long ponytails, luxurious shoulder-length hairdos, loose-fitting, unbuttoned blouses billowing in the breeze, tight light-washed jeans... and that's just the guys. 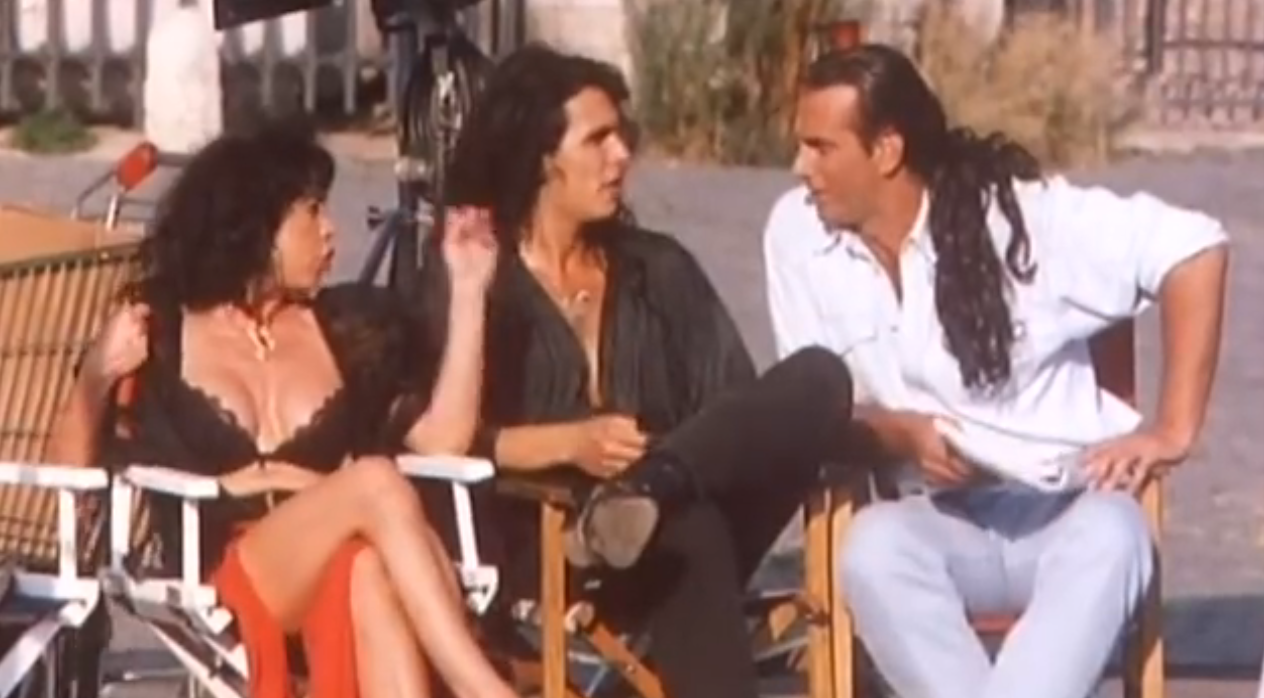 Everyone looks like Fabio. Or the saxophone player in The Lost Boys.  Also, here's a shot of Stefania's costume for her music video. 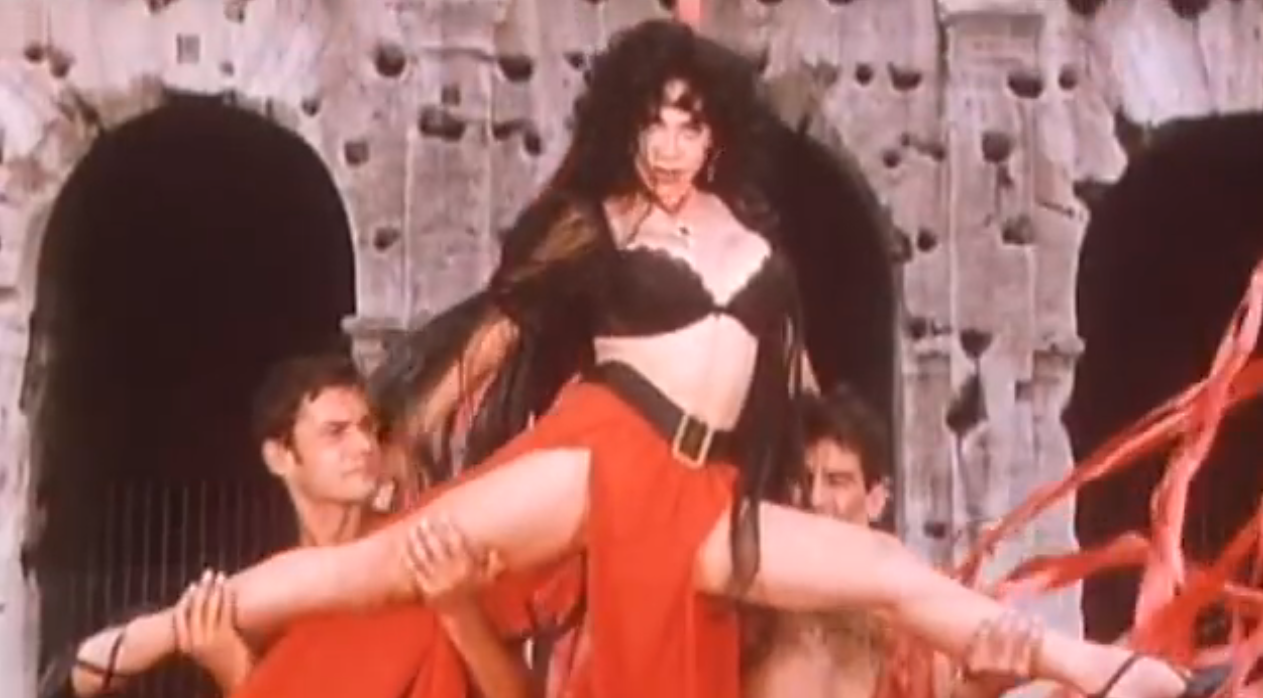 Guys, can you get out of the way? You're ruining my view of the Colosseum.