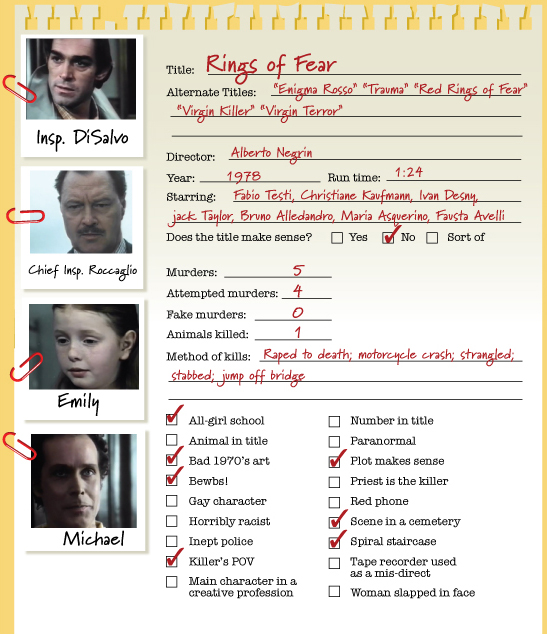 Rings of Fear
"The truth can never be ignored."

When the body of a teenage girl is discovered wrapped in plastic in a reservoir, Inspector Gianni DiSalvo (Fabio Testi) is put on the case. His investigation leads to a prestigious all-girls' school where the victim's friends, a clique that calls themselves "The Inseparables," share a dark secret. The mystery leads to menacing poems, a diary filled with cartoon cats, and a chic clothing boutique owned by an alleged art forger. Soon, other students and suspects in the investigation start turning up dead and even DiSalvo himself becomes a target. With the help of the first victim's kid sister, Emily (Fausta Avelli), DiSalvo must piece together the clues, learn The Inseparables' secret, and stop the murderer.

Rings of Fear is known by many titles, including Red Rings of Fear,  Virgin Killer, Virgin Terror, and Trauma (though it's not to be confused with Dario Argento's 1993 giallo, also titled Trauma). None of those are apt or at all accurate and I suppose calling the movie The Inseparables would have made it seem like a lighthearted buddy picture. Director Alberto Negrin must be a fan of Massimo Dallamano because this film's plot is not only a retread of 1972's  What Have You Done With Solange?, borrowing its "schoolgirls with a deadly secret" plot and its star, Fabio Testi, but also incorporates elements from 1974's What Have They Done to You Daughters? - namely a scene on a roller coaster and swaggering, brassy theme music. Rings of Fear does hit some original notes, including the identity of the killer, which you probably won't see coming, and some creative murders and attempted murders.

Ironically, by-the-book cop DiSalvo's wife, Christina (Christiane Kaufman) is a kleptomaniac. Besides that little contradiction, their marriage seems fine but about halfway through the film, as he's walking out the door, she breaks up with him in the most nonchalant way. She just says "I won't be here when you get back." He casually replies "Thanks for telling me." And then we never hear from her again.

Rings of Fear also features the most matter-of-fact suicide scene I can remember. The killer casually admits to the crimes while strolling atop a dam and then when he's done, calmly climbs the railing and throws himself over the edge.

But that person isn't the only responsible party and when a second murderer is revealed, DiSalvo just lets the killer off the hook with a wink and a smile.

Fed up with all the secrets, DiSalvo bursts into the school late at night, knocking on doors, waking everyone up, and demanding answers. This is, unsurprisingly, not a very productive investigative technique.

Later, DiSalvo gets answers from a suspect by forcing him on a roller coaster and choking him. Dude has some serious issues. I'm starting to get a better picture of why his wife left him.

Giallo movies are known for creative and bizarre camera work. I've seen killer's POV, butterfly POV, and mattress POV, but this is the first movie I've ever seen - possibly the only movie ever made for a mainstream audience - that has vagina POV.

The color palate of Rings of Fear is pretty drab, full of boring neutrals and earth tones. So when suspect Michael Paravinci (Jack Taylor) greets the detectives in a bright yellow robe it really stands out. 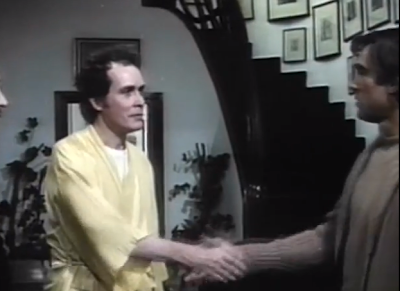 And if you're at all familiar with how giallo movies work, you know that that color choice isn't an accident and that it marks Michael as a significant suspect in the case.