Killer Without a Face 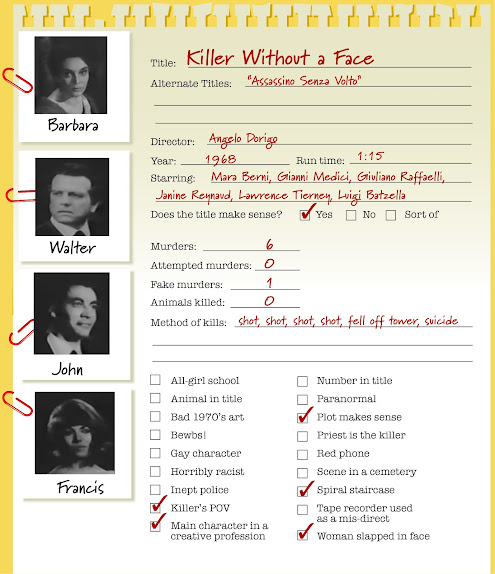 "Nobody can convince me that this place isn't haunted."
Barbara (Mara Berni) and her husband Walter (Giuliano Raffaelli) live in an English medieval castle, joined by Barbara's friend Francis (Janine Reynaud), the accountant Clark (Luigi Batzella, credited as Paolo Solvay) and a small staff. When handsome architect John (Gianni Medici) arrives to renovate the estate, he charms with all the ladies but soon uncovers some shocking secrets. First, that the castle is said to be haunted by an ancient curse. Then he learns that Barbara's cousin fell from the high tower and died shortly before his arrival, which helps to explain her wild mood swings from deep depression to manic joy. Before long, more residents of MacDonald Castle show up dead. Could the curse be responsible? Or has Barbara's trauma led to a deadly psychotic break? Could target shooting hobbyist Francis be involved?
Killer Without a Face (not to be confused with Eyes Without a Face) is a quaint early giallo, more in line with Agatha Christie than with Mario Bava. The gothic flourishes are all there, from the dark castle, raging storms and spooky cellar to the family curse. This pre-dates the flashy, wild style that the genre is famous for and the only real modern element is the jazzy score. Still, it's a cozy and fun little tale.
• You may remember Giuliano Raffaelli from Blood and Black Lace and he also had an uncredited part in Roman Holiday. Janine Reynaud would go on to appear in The Case of the Scorpion's Tail.
• The most famous face in the cast is probably Lawrence Tierney, who plays the mute groundskeeper, best known to modern audiences as mob boss Joe Cabot in Reservoir Dogs.
• This is the last film credit for Anita Todesco, who plays replacement maid Mary.
• The title couldn't be more generic and doesn't relate specifically to the story.
What the Hell am I Watching?
Again, this is a buttoned-down early giallo, so there's not a lot of visual excitement or insane plot twists here. But Francis's target pistol with a silencer attached (so as not to disturb Barbara) is kind of bonkers. 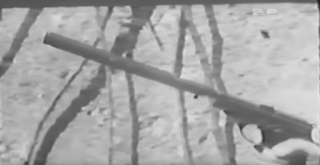 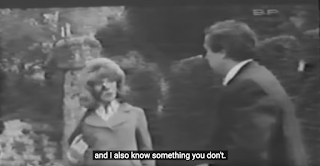 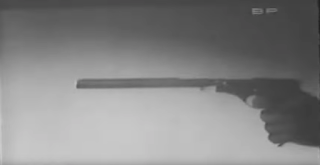 Fashion Moment:
No flash on the fashion front either - pretty much conservative suits, dresses and domestic uniforms. This nightgown is as daring as it gets. 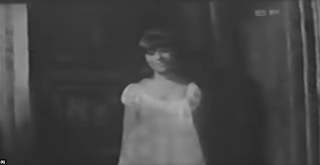 Also, here's a gorgeous shot of the castle's spiral staircase. 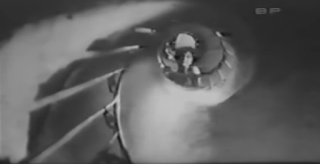